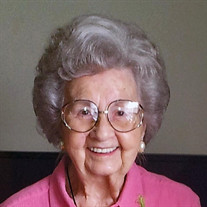 Delorice Honeyman died Sunday, October 24, 2021 in Austin, TX. She was 101 years old when she succumbed to nothing more than time. She was born the year women first voted. She grew up on a farm in rural Kansas, rode a horse to school, played basketball in high school earning state-wide accolades, and lived in Germany with her husband in the American constabulary force after WW II. She witnessed The Beatles, the American Civil Rights Movement, a man walking on the moon, and a Cubs World Series championship. She loved watching KU basketball as much as anything in life. She sang, played piano, managed her family's money, and raised two children to responsible adulthood. And the world revolved around her grandchildren until they, too, became responsible adults. Delorice was born April 17, 1920 in rural Greenwood County, KS, near Eureka, the daughter of James Thomas Davis and Irene Brookover Davis. She grew up near Reece, KS, west of Eureka. She attended Greenwood County country schools, graduating from Reece High School in 1937. She graduated from Hutchinson Community College in Hutchinson, KS, and Chilicothe Business College in Chilicothe, MO. Before meeting her husband, Robert E. Honeyman, she held jobs at the Sunflower Ordnance Powder Plant in DeSoto, KS, and Secretary to the Dean of Students at the University of Kansas. On January 18, 1946, she married Bob Honeyman, then a captain in the U.S. Army. After they were married Delorice traveled to Europe to be with Bob as the transition from war to peacetime took place. They lived in Germany in 1946 and 1947. Bob and Delorice were married for 67 years until Bob died in 2013. While in school, Delorice was active in sports, playing basketball at Reece High School for four years. She also sang in school and for the rest of her life, receiving high ratings in vocal contests before her wedding. She was a soloist at nearly every church she ever attended in Eureka, Lawrence, Manhattan, Emporia, Omaha, NE, Indianapolis, IN, and Wichita. She was a member of music clubs in Manhattan, Wichita, and Eureka. As a child, she was a baptized Congregationalist in Eureka, and she and her family attended Plymouth Congregational Church in Wichita after the family moved there in 1969. When she and Bob retired to her ancestral farm in western Greenwood County, she and Bob attended the Christian and Congregational Church in Eureka. Delorice was a committed wife, mother, and grandmother, raising son Jim and daughter Carol while Bob pursued a promising career in the insurance industry. Bob used to marvel at Delorice’s budgeting skills saying “she could squeeze the life out of a nickel.” It was high praise, indeed. In 2007, Delorice moved with Bob to the Masonic Home in Wichita. After his death, her daughter Carol brought her to San Angelo, TX, where Carol and her husband, David, lived. Upon their retirement, Delorice joined them in Austin. Delorice made sure she took from life all it had to offer. She will be missed by friends and family, far and wide. Memorial services will be held at 1:00 P.M., Saturday, April 23, 2022, at Christian & Congregational Church, in Eureka with Pastor Stan Seymour of El Dorado officiating. Cremation has been effected and inurnment made at Greenwood Cemetery, at an earlier date.

Delorice Honeyman died Sunday, October 24, 2021 in Austin, TX. She was 101 years old when she succumbed to nothing more than time. She was born the year women first voted. She grew up on a farm in rural Kansas, rode a horse to school, played... View Obituary & Service Information

The family of Delorice Irene (Davis) Honeyman created this Life Tributes page to make it easy to share your memories.

Send flowers to the Honeyman family.