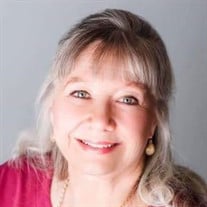 Debra Louise Darrah of Wichita, died on Sunday, October 13, 2019, at her home in Wichita, at the age of 67, surrounded by her family. Debra was born November 1, 1951, in Shattuck, Oklahoma, the daughter of Earl Duane and Dolores LaFaun (Hoch) Holcomb. She was raised in Shattuck and later Wichita, where she graduated from West High School in 1969. In the early 70’s, Debra was united in marriage to Gary Dean Fouch. To this union two children were born. On October 29, 1981, Debra was united in marriage to Robert William Darrah in Wichita. To this union two children were born, and she also lovingly welcomed three stepchildren. Robert preceded her in death on January 17, 2017. Debra was a homemaker and also worked as an office manager, retiring in 2018. She was a member of the Westview Baptist Church in Wichita. She loved spending time with family and her greatest joy was her grandchildren. She is survived by her seven children: Robin and husband, Tom Berning of Wichita; Robert Michael and wife, Jean Darrah of Wichita; Patrick Darrah of Tacoma, Washington; Brian and wife, Monica Fouch of Park City; Jennifer and husband, Casey Farmer of Wichita; Casey and husband, Brent Jewell of Rose Hill; and Suzanne Kraft and partner, Todd Morgan of Valley Center; her mother, Dolores Holcomb of Wichita; twenty-three grandchildren; seventeen great-grandchildren; and three siblings: Bill Holcomb of Coyville; Donella and husband, Doug Spaulding of Rose Hill; and James Holcomb of Cheney. She was preceded in death by her husband, father, and one brother, Damon Holcomb. Memorial services will be held at 2:00 P.M., Sunday, October 20, 2019, at the Westview Baptist Church, 1325 S. Meridian St., Wichita. A private burial was held on Monday, October 14, at Toronto Cemetery, Toronto, Kansas. In lieu of flowers the family has requested that memorial donations be made to the Westview Youth Scholarship Fund. Contributions may be sent in care of Koup Family Funeral Home, P. O. Box 595, Eureka, KS 67045, which is overseeing arrangements. Condolences may be left for the family online at koupfunerals.com.

Debra Louise Darrah of Wichita, died on Sunday, October 13, 2019, at her home in Wichita, at the age of 67, surrounded by her family. Debra was born November 1, 1951, in Shattuck, Oklahoma, the daughter of Earl Duane and Dolores LaFaun (Hoch)... View Obituary & Service Information

The family of Debra Darrah created this Life Tributes page to make it easy to share your memories.

Send flowers to the Darrah family.