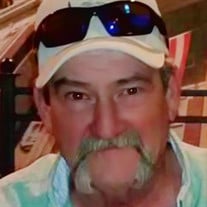 Dean Russell Miller of Eureka, died Friday, April 29, 2022, at Wesley Medical Center in Wichita, at the age of 62. He was born August 29, 1959, in Wichita, KS, the son of Jerry and Daylene (Conklin) Miller. He was raised in Wichita and attended local schools, graduating from Wichita Southeast High School. Dean worked in the industrial insulation business as a project manager. He moved all over the country for his work until his health forced him to take early retirement. He retired to Eureka, Kansas where he enjoyed fishing, hunting, riding his motorcycle, and off-roading with his son. On August 29, 2015, Dean was united in marriage to Nicole McKnight in Atchison, Kansas. She survives him at home. Along with his wife, Nicole, Dean is survived by his mother, Daylene Kiser of Derby; 9 children: Rodney and wife, Karen Miller of Eureka; Jerrod and wife, Amanda Miller of Olathe, Kansas; T.C. Miller of Yates Center, Kansas; Kassi Miller of Leroy, Kansas; Autumn Miller of the home; London Wallace of Eureka; Jerzi Wallace of Eureka; Kaley Boyce of Emporia; and Tanner Boyce of Kansas City, Kansas; fifteen grandchildren; 2 great-grandchildren; and 3 brothers: Mike and wife, Shelly Miller of Derby, Kansas; Steve and wife, Leslie Miller of Wichita, Kansas; and Larry and wife, Shelly Miller of Everett, Washington. He was preceded in death by his father, Jerry Miller; and his grandparents: Gerald and Pauline Miller, and George and Mary Alice Conklin. Memorial services will be held at 2:00 P.M., Monday, May 9, 2022, at Greenwood Cemetery with Pastor Larry Evans of the Neal Evangelical Free Church officiating. Cremation has been effected. In lieu of flowers, the family requests that memorials be made to the funeral home for expenses. Contributions may be sent in care of Koup Family Funeral Home, P.O. Box 595, Eureka, KS, which is overseeing arrangements. Condolences may be left for the family online at koupfunerals.com.

Dean Russell Miller of Eureka, died Friday, April 29, 2022, at Wesley Medical Center in Wichita, at the age of 62. He was born August 29, 1959, in Wichita, KS, the son of Jerry and Daylene (Conklin) Miller. He was raised in Wichita and attended... View Obituary & Service Information

The family of Dean Russell Miller created this Life Tributes page to make it easy to share your memories.

Send flowers to the Miller family.