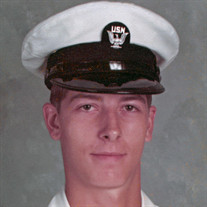 David Edward Buckle of Topeka, died on Saturday, July 22, 2017 at his home in Topeka, at the age of 59. He was born on October 29, 1957, in Eureka, the son of Edward Eugene and Mable “Joan” (Bradford) Buckle. The family moved often while David was young and he grew up in Norwalk, California, Tripoli, Libya, Torremolinos, Spain, and Eureka, graduating from Eureka High School. After his schooling, he joined the United States Navy where he served with honor and dignity aboard the U.S.S. Elliott. After his discharge, he returned to Eureka and worked in construction, oil, and for the City at one point. He later moved to Topeka. He is survived by three grandchildren, Kobe, Braylee, and Zoey Buckle of Wichita; his parents, Ed and Joan of Eureka; and two sisters, Debra Buckle of Kansas City, Missouri; and Cynthia Buckle of Eureka. He was preceded in death by his son, Jeremy. Funeral services will be held at 2:00 P.M., Tuesday, July 25, 2017 at Koup Family Funeral Home, in Eureka with Pastor Drew Reding of the First Presbyterian Church of Clay Center officiating. Interment will follow at Janesville Cemetery. In lieu of flowers, the family has requested that memorials be made to the Colmery-O'Neil VA Medical Center. Contributions may be sent in care of Koup Family Funeral Home, P.O. Box 595, Eureka, KS 67045 which is overseeing arrangements. Condolences may be left for the family online, at koupfunerals.com

The family of David Edward Buckle created this Life Tributes page to make it easy to share your memories.

Send flowers to the Buckle family.