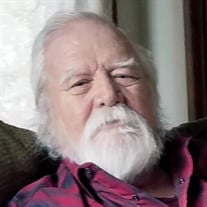 Danny Dale Shue of Eureka, died on Tuesday, August 18, 2020 at his home in Eureka, at the age of 78. He was born on December 16, 1941, in Fredonia, the son of Edwin William and Elva May (Milligan) Shue. He was raised in Fredonia and graduated from local schools. In 1960 Dan was united in marriage to Rowena. They made their home in Fredonia. To this union four children were born. The marriage later ended in divorce. He began working at Boeing right after school, working there for eighteen years. While at Boeing he met Shelia Myers. They were united in marriage in 1973, in Newkirk, Oklahoma. To this union two children were born. They made their home at Toronto lake and opened the Hilltop restaurant. Later they moved to Eureka where they ran the Chuck Wagon Truck Stop for over 15 years, retiring in the mid 00’s. Shelia preceded him in death on October 29, 2012. Danny will be remembered by family and friends as a kind, loving person. He would do anything or give anyone whatever they needed, even the shirt off his own back. He is survived by six children, Donna Gallart of Wichita; Robin Kelley of Hutchinson; David Shue of Wichita; Shannon Gillette of El Dorado; TJ Shue of Sherman, Illinois; and one other daughter; plus Michael Rockhill of Wichita, and Jeff Rockhill of Eureka, whom he claimed as his own; thirteen grandchildren; six great-grandchildren; and three siblings, Ralph Shue of Wichita; Donnie Shue of Clearwater; and Grace Crawshaw of Fredonia. He was preceded in death by his parents and wife, and two brothers, Robert and Gary Shue. Memorial services will be held at a later date. Cremation has been effected. The family requests that memorials be made to the American Cancer Society. Contributions may be sent in care of Koup Family Funeral Home, P.O. Box 595, Eureka, KS 67045, which is overseeing arrangements. Condolences may be left for the family online, at koupfunerals.com.

Danny Dale Shue of Eureka, died on Tuesday, August 18, 2020 at his home in Eureka, at the age of 78. He was born on December 16, 1941, in Fredonia, the son of Edwin William and Elva May (Milligan) Shue. He was raised in Fredonia and graduated... View Obituary & Service Information

The family of Danny Shue created this Life Tributes page to make it easy to share your memories.

Send flowers to the Shue family.