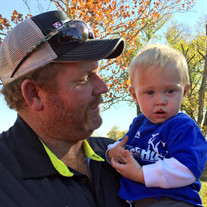 Danny Hurley of Eureka, died on Sunday, May 14, 2017 at Greenwood County Hospital in Eureka, at the age of 45. He was born on October 15, 1971, in Wichita, Kansas, the son of Donnie and Mary Hurley. He was raised in Climax and attended local schools, graduating from Eureka High School with the Class of 1990. He also attended Flint Hills Vo Tech for Auto Mechanics. After his schooling, he worked in oil around the Eureka area and later worked for the City of Eureka for 15 years. In 2010, he went to work for the Severy Co-Op. In 1998, he volunteered with the Greenwood County Central Division Fire Department, serving as Chief of the Central Division since 2011. In all he volunteered for over 17 years with the county. He volunteered with the Eureka City Fire Department in 2000 and then started as an EMT in 2002. On April 25, 2009, he was united in marriage to Deborah Michelle Selfridge in Eureka, where they made their home. He is survived by his wife, Debi Hurley of the home; five children, Clay and wife, Melissa Wade of Eureka; Scharryl Ledford of Eureka; Dusty Hurley of Eureka; Micheal Ledford of Eureka; and Rusty Hurley of Eureka; his mother, Mary Gamblain of Fort Worth, Texas; one grandson, Tanner Lyle Wade; and four siblings, Donnie Hurley of Leon; Jimmy Hurley of Blanchard, Oklahoma; Rosa Hurley of Albuquerque, New Mexico. He was preceded in death by his father, and two sisters, Dinah Hurley and Donna Hodgins. Memorial services will be held at 1:00 P.M., Friday, May 19, 2017 at Koup Family Funeral Home, in Eureka with Mr. Jayme A. Koup officiating. Cremation has been effected. In lieu of flowers, the family requests that memorials be made to the Greenwood County Fire Department Central Division Scholarship Fund. Contributions may be sent in care of Koup Family Funeral Home, P.O. Box 595, Eureka, KS 67045 which is overseeing arrangements. Condolences may be left for the family online, at koupfunerals.com

Danny Hurley of Eureka, died on Sunday, May 14, 2017 at Greenwood County Hospital in Eureka, at the age of 45. He was born on October 15, 1971, in Wichita, Kansas, the son of Donnie and Mary Hurley. He was raised in Climax and attended local... View Obituary & Service Information

The family of Danny Hurley created this Life Tributes page to make it easy to share your memories.

Send flowers to the Hurley family.