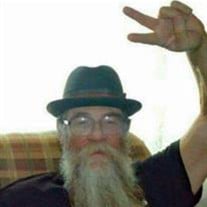 Daniel Dulany DeButts Stitt of Hamilton, KS, died Monday, October 30, 2017, at his home in Hamilton, at the age of 74, following a long battle with cancer. Dan was born September 17, 1943, in El Paso, TX, the son of Marvin Dean and Elizabeth (Hargrave) Stitt. As a child the family moved around following his father’s work. Eventually they settled in Caney, KS, where he attended local schools, graduating from Caney High School. Following his graduation, Dan joined the United States Navy in 1964. He served with dignity and honor aboard the oiler USS Hassayampa AO-145, on WESTPAC as a Gunner’s Mate during the Vietnam War. While in the service he met Melchora Acaso. They were united in marriage on January 30, 1970, in Olongapo City, Phillipines. To this union three children were born. Dan attended Wichita State University, earning a Bachelor’s Degree in Journalism. The family settled in Hamilton, Kansas. Dan was an avid deer hunter and fisherman. His passion was duck hunting, Hot Rods, and Harley Davidsons. Dan served as mayor of Hamilton, a member of VFW #2712, the Hamilton Lions Club, and Ducks Unlimited. He is survived by his wife Melchora, of the home; three children: Christine and husband, David Mouer of Eureka; Daniel Dulany DeButts “Buddy” Stitt II of Eureka; and Waylon and wife, Robin Stitt of Eureka; nine grandchildren; one great-grand child; one brother, John Stitt of Seminole, Ok; and one sister, Mary Stitt of Tulsa, OK. He was preceded in death by his parents, brother Sam Stitt, and sister Elizabeth Stitt. Funeral services are set for 9:00 A.M., Friday, November 3, 2017, at Koup Family Funeral Home in Eureka. Interment will follow at Janesville Cemetery, in Hamilton. Visitation hours are set from 5:00 P.M. to 7:00 P.M, Thursday, at the funeral home. In lieu of flowers, the family has requested that memorials be made to the Hamilton Senior Center. Contributions may be sent to Koup Family Funeral Home, P.O. Box 595, Eureka, KS 67045, which is overseeing arrangements.

Daniel Dulany DeButts Stitt of Hamilton, KS, died Monday, October 30, 2017, at his home in Hamilton, at the age of 74, following a long battle with cancer. Dan was born September 17, 1943, in El Paso, TX, the son of Marvin Dean and Elizabeth... View Obituary & Service Information

The family of Daniel Dulany DeButts Stitt created this Life Tributes page to make it easy to share your memories.

Send flowers to the Stitt family.