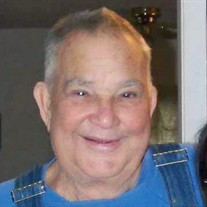 Dale Vinton Guisinger of Eureka, died on Thursday, October 26, 2017, at the Eureka Nursing Center, in Eureka, at the age of 90. He was born on March 25, 1927, in Toronto, the son of Charlie Oscar and Esther E. (Benson) Guisinger. He was raised in the Toronto-Eureka area attending Union School, Tonovay, and Eureka High School. After his schooling, he joined the United States Army. He was stationed in Germany during the Korean War. After his discharge, he returned to Eureka and drove the school bus for Tonovay. He farmed and loved to garden. He would give away the extra vegetables he didn’t need. He later moved to Newton, working for the Hesston Corporation. He also was a part-time paper carrier for the Newton Kansan, and car wash manager. In 1966, Dale was united in marriage to Fern Nunn in Eureka. To this union, two children were adopted. This marriage later ended in divorce. In 1979, Dale was united in marriage to Dorothy Cornelius in Newton. This marriage later ended in divorce. He was a lifetime member of VFW Post #2712. He is survived by two children, Madeline and husband, Bruce Large of Newton, Kansas; and Gary Dale Guisinger of Salina, Kansas; four grandchildren: Aaron and wife, Shannon Large of Yorba Linda, CA; Amber and husband, Troy Cryer of Branson, MO; Melissa Unruh of Anaheim, CA; and Nathan and wife, Nani Unruh of Corona, CA; ten great-grandchildren; one sister, Orella and husband, Leon Richardson of Eureka; two nieces, Janice Massey of Eureka; and Teresa Ely of Oberlin, Nebraska; nephew, Steve Richardson of Eureka; and one grandson-in-law, Jeff Moore of Lampe, Missouri. He was preceded in death by his parents, one granddaughter, April Ann Large-Moore; and one nephew, Mike Richardson. Graveside services will be held at 2:00 P.M., Saturday, November 4, 2017 at Neal Cemetery, in Neal with Pastor John Craighead of the Jefferson Street Baptist Church officiating. Visitation hours are set from 10:00 A.M. to 12:00 P.M., Saturday, at the funeral home. In lieu of flowers, the family has requested that memorials be made to the Flyin’ 3 Veterinary Service (Eureka) or Tuffy's Fund (Newton) to help with veterinary services. Contributions may be sent in care of Koup Family Funeral Home, P.O. Box 595, Eureka, KS 67045, which is overseeing arrangements. Condolences may be left for the family online at koupfunerals.com.

Dale Vinton Guisinger of Eureka, died on Thursday, October 26, 2017, at the Eureka Nursing Center, in Eureka, at the age of 90. He was born on March 25, 1927, in Toronto, the son of Charlie Oscar and Esther E. (Benson) Guisinger. He was raised... View Obituary & Service Information

The family of Dale Vinton Guisinger created this Life Tributes page to make it easy to share your memories.

Send flowers to the Guisinger family.