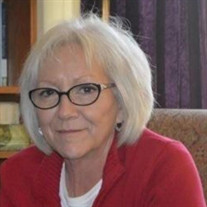 Cynthia Jo “Cindy” Dorey of Eureka, died on Sunday, April 26, 2020, at Greenwood County Hospital, in Eureka, at the age of 68. She was born on February 7, 1952, in Wichita, Kansas, the daughter of Bernard Alphonse “Ben” and Barbara Jean (Huggerth) Arpin. She was raised in Wichita and graduated from Wichita South High School with the Class of 1970. On December 3, 1970, Cindy was united in marriage to Douglas Allen Dorey in Mulvane. To this union, two children were born. They made their home in Arizona and returned to Kansas eight years later, settling in Eureka. Cindy worked as a Paraprofessional at Eureka schools for 20 + years, retiring in 2014. She is survived by her husband, Doug of the home; two sons, Spencer Dorey of Wichita; and Noah and wife, Amanda Dorey of Towanda; two grandchildren: Eli and Kimber; and three sisters, Catherine Odle of Wichita; Janet Rader of Climax; and Rebecca Paque of Valley Center. She was preceded in death by her parents. Memorial services will be held at 2:00 P.M., Friday, May 8, 2020 at Greenwood Cemetery, in Eureka with Pastor Jerry Clark officiating. Cremation has been effected. In lieu of flowers, the family has requested that memorials be made to the Greenwood County Hospital Foundation or for the Greenwood County Home Health. Contributions may be sent in care of Koup Family Funeral Home, P.O. Box 595, Eureka, KS 67045, which is overseeing arrangements. Condolences may be left for the family online, at koupfunerals.com.