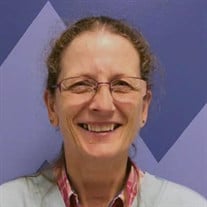 Cynthia Ann Buckle of Eureka, died on Friday, July 23, 2021, at Greenwood County Hospital, in Eureka, at the age of 62, after a long battle with frontotemporal dementia. She was born on December 17, 1958, in Perry, Iowa, the daughter of Edward Eugene and Mabel “Joan” (Bradford) Buckle. As a small child she was raised in California, Tripoli, Malta, and Spain as the family lived various places for her father’s work. They then made their home in Eureka and Cyndi attended local schools, graduating from Eureka High School with the Class of 1977. She later attended Butler County Junior College. On July 15, 1978, Cyndi was united in marriage to Jack Dale Alford in Eureka. To this union, three children were born. They made their home in Eureka. Cyndi worked as a veterinary assistant for over thirty years with Dr. Duane Droge serving and loving the community’s animals. She later worked for Dr. Kailey Fitzmorris, until her health forced her to stop working. Cyndi spent her life loving her family and animals, always laughing, and adopting everyone she met as one of her “kids.” She volunteered as a girl scout leader for many years and never missed any of her “kids’” activities. Cyndi is survived by her three children, Celisa Reding and husband, Drew of Ottawa; Sean Alford and fiancée, Yvette Lawrence of Eureka; and Mathew Alford and wife, Kodi of Spring Hill; parents, Ed and Joan Buckle of Eureka; eight grandchildren; and one sister, Debra Buckle of Liberty, Missouri. She was preceded in death by her husband, Jack; and brother, David Buckle. Funeral services will be held at 2:00 P.M., Tuesday, July 27, 2021, at Koup Family Funeral Home, Eureka with Pastor Drew Reding of the Grace Community Fellowship of Ottawa officiating. Interment will follow at Janesville Cemetery, Hamilton. Visitation hours are set from 5:00 P.M. to 7:00 P.M., Monday, at the funeral home. In lieu of flowers, the family requests that memorials be made to the Kansas Humane Society. Contributions may be sent in care of Koup Family Funeral Home, P.O. Box 595, Eureka, KS 67045, which is overseeing arrangements. Condolences may be left for the family online, at koupfunerals.com.

Cynthia Ann Buckle of Eureka, died on Friday, July 23, 2021, at Greenwood County Hospital, in Eureka, at the age of 62, after a long battle with frontotemporal dementia. She was born on December 17, 1958, in Perry, Iowa, the daughter of Edward... View Obituary & Service Information

The family of Cyndi Buckle created this Life Tributes page to make it easy to share your memories.

Send flowers to the Buckle family.