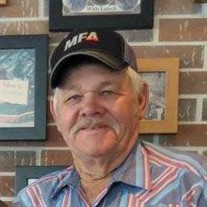 Curtis Raymond Shaw of Eureka, died on Thursday, April 20, 2017, at the Via Christi Regional Burn Center in Wichita, at the age of 72. He was born on January 27, 1945, in Eureka, the son of Harrel and Elizabeth (Williams) Shaw. He was baptized on April 6, 1947, at Upper Fall River Lutheran Church and confirmed there on March 22, 1959. He was raised in South Salem Township and graduated from Holverson rural school and Eureka High School. After his schooling, he did plumbing in the Eureka area before moving to Emporia. He later returned to Eureka to pursue his dream of becoming a farmer and rancher. He also worked as a farmhand and general handyman for others in the area while continuing to build his own herd of cattle. On October 3, 1964, Curtis was united in marriage to Linda Carroll in Eureka, where they made their home. He was a member of the Greenwood County Cattlemen’s Association and Christ Lutheran Church, attending Upper Fall River Lutheran Church. He is survived by his wife, Linda of the home; two sons, Mark and wife, Brandy Shaw of Solomon, Kansas; and Kevin and wife, Lynetta Shaw of Eureka; ten grandchildren; three great-grandchildren; six siblings: David and wife, Nancy Shaw of Nenana, Alaska; Rosalie Clites of El Dorado, Kansas; the Rev. Patricia Shaw of Waverly, Iowa; Paul and wife, Beth Shaw of Valley Center, Kansas; Marcia and husband, Geoffrey Dahlman of Topeka, Kansas; and Alan and wife, Kathie Shaw of Nenana, Alaska; brother-in-law, Dell Wharry of Rocky Ford, Colorado; and sister-in-law, Sharon Shaw of Eureka. He was preceded in death by his parents; one brother, Darrel Shaw; one sister, Beth Wharry; and one granddaughter, LySandra Shaw. Funeral services will be held at 2:00 P.M., Wednesday, April 26, 2017 at Christ Lutheran Church in Eureka with the Rev. Tim Meyer officiating. Interment will follow at Greenwood Cemetery. In lieu of flowers, the family has requested that memorials be made to the Christ Lutheran Church or to Greenwood County Hospital. Contributions may be sent in care of Koup Family Funeral Home, P.O. Box 595, Eureka, KS 67045, which is overseeing arrangements. Condolences may be left for the family online, at koupfunerals.com

Curtis Raymond Shaw of Eureka, died on Thursday, April 20, 2017, at the Via Christi Regional Burn Center in Wichita, at the age of 72. He was born on January 27, 1945, in Eureka, the son of Harrel and Elizabeth (Williams) Shaw. He was baptized... View Obituary & Service Information

The family of Curtis Raymond Shaw created this Life Tributes page to make it easy to share your memories.

Send flowers to the Shaw family.