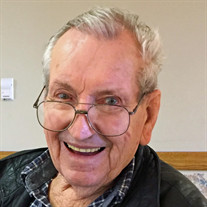 Cornelius “Dutch” Vander Meyden Cornelius “Dutch” Vander Meyden, formerly of Severy, Kansas, departed this life on Sunday, September 25, 2016 at the Kansas Veterans Home in Winfield, Kansas at the age of 84. He was born on February 13, 1932, in Giessendam, Holland, The Netherlands, the son of Dirk and Mensje “May” (Baan Hofman) Vander Meyden. He immigrated to the United States with his family in 1947, eventually settling in Severy. Cornelius served with honor and dignity in the Marine Corps during the Korean War, obtaining his United States citizenship in 1952. On August 28, 1968, Dutch was united in marriage to Virginia “Maxine” Chapman in Miami, Oklahoma. He retired to his family farm in Severy after over 30 years with Belger Cartage Service in Wichita. She preceded him in death on July 30, 2003. He is survived by two nephews, Dirk Cornelius VanderMeyden, currently serving on active duty with the U.S. Army at Fort Meade, Maryland; Michael Vandermeyden of Port Orchard, WA; niece, Angela May Adams of Wichita, Kansas; brother, Dick Vandermeyden of Cortez, Colorado; his beloved dog, Patti; and numerous other extended family and friends. He was preceded in death by his parents; wife, Maxine; and one brother, Tony VanderMeyden. Graveside services will be held at 2:00 P.M., Friday, October 7, 2016 at Twin Grove Cemetery in Severy. In lieu of flowers, the family respectfully suggests memorial contributions to be made St. Jude Children’s Research Hospital. Contributions may be sent in care of Koup Family Funeral Home, P.O. Box 595, Eureka, KS 67045, which is in charge of service arrangements. Condolences may be left for the family online at koupfunerals.com.

The family of Cornelius "Dutch" Vander Meyden created this Life Tributes page to make it easy to share your memories.