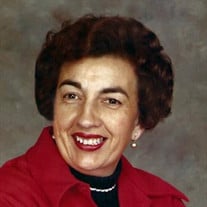 Constance Lou (Bowman) Myers of Kanas City, MO died on October 1, 2017 at North Kansas City Hospice House at the age of 84. She was born on March 20, 1933 in Two Buttes, Colorado to Louis Clyde and Edith Helen (Hiatt) Bowman. Connie was raised in Lamar, Colorado before the family moved to Stockton, MO in 1948. She graduated from Stockton High School in 1951. She then married William Paul Myers in Harrison, AR on March 21, 1952. They moved to Kansas City to make their home. For most of her marriage Connie was a full-time homemaker. She was a devout Jehovah’s Witness getting baptized in 1955. She spent a lot of her time in the full-time ministry. She loved to travel and had been to many places including, Scotland, Alaska, Canada, Key West, through the Panama Canal just to name a few. Connie is survived by three children, David, Matt and Marilyn Myers of Kansas City; three grandchildren, Matt Myers, Dalton Myers and Alicia Hall; and seven great-grandchildren; and one brother, Louis Bowman. She was preceded in death by her parents; husband; son, Danny Myers; and her sister, Joyce Carroll. Memorial services will be held at 3:00 P.M., Saturday, October 7th, 2017 at at the Kingdom Hall of Jehovah’s Witnesses, 5120 N.W. Old Pike Rd., Kansas City, MO 64118. Cremation has been effected. A private family inurnment will take place at a later date. In lieu of flowers, the family has requested that memorials be made to the Kingdom Hall of Jehovah’s Witnesses.

The family of Constance Lou "Connie" Myers created this Life Tributes page to make it easy to share your memories.

Send flowers to the Myers family.