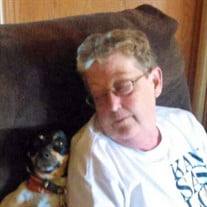 Connie Elizabeth Rollins of Eureka, died on Friday, July 2, 2021, at her home at Eureka Lake, at the age of 71. She was born on February 23, 1950, in Council Bluffs, Iowa, the daughter of Fred Jr. and Vivian (Gillman) Fowler. She was raised in Council Bluffs and graduated from Lewis Central High School. On June 20, 1969, Connie was united in marriage to Victor Gene Rollins in Council Bluffs. They made their home in Council Bluffs and in 1982, moved to Park City, Kansas. To this union, two children were born. Connie began working for Fidelity Investments in Wichita as an escrow analyst. In her capacity she traveled to many other places training other employees. She retired in the mid 90’s having worked her way up to a Vice President position. In 1997, she and Victor moved to Eureka Lake. Connie will be remembered for her deep love of her children and grandchildren. Those who knew her will always remember her lovingness and generosity. Connie loved knitting, sewing, ceramics, and all kinds of artistic handiwork. She enjoyed spending time at casinos, and she liked playing Bingo. Besides her family, she loved Eureka Lake. She is survived by her husband, Victor, of the home; children, Victor Gene Rollins, Jr. of Piedmont; and Leslee Ann Rollins of Eureka; two grandchildren, Austin Rollins, and Brielle Austin; and one brother, Richard “Dick” Fowler of Council Bluffs, Iowa. She was preceded in death by her parents; brother, Dwayne “Duke” Fowler; and sister, Cindy Krahan. Funeral services will be held at 2:00 P.M., Friday, July 9, 2021, at Koup Family Funeral Home, in Eureka with Pastor Kevin Lawrence of the Climax United Methodist Church officiating. Interment will follow at Greenwood Cemetery, Eureka. In lieu of flowers, the family requests that memorials be made to the funeral home to help with expenses. Contributions may be sent in care of Koup Family Funeral Home, P.O. Box 595, Eureka KS 67045, which is overseeing arrangements. Condolences may be left for the family online, at koupfunerals.com.

Connie Elizabeth Rollins of Eureka, died on Friday, July 2, 2021, at her home at Eureka Lake, at the age of 71. She was born on February 23, 1950, in Council Bluffs, Iowa, the daughter of Fred Jr. and Vivian (Gillman) Fowler. She was raised... View Obituary & Service Information

The family of Connie Elizabeth Rollins created this Life Tributes page to make it easy to share your memories.

Send flowers to the Rollins family.