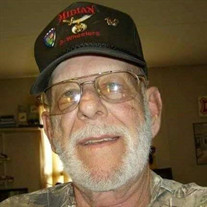 Clarence “Irwin” Moreland, Jr. of Eureka, died on Wednesday, May 18, 2016 at his home in Eureka at the age of 76. He was born on June 16, 1939, in Rogersville, Missouri, the son of Clarence Irwin, Sr. and Mabel Irene (Mincks) Moreland. He was raised in Wichita and attended local schools. On March 19, 1957, Irwin was united in marriage to Mary “Marlene” Munsell in Hutchinson. They made their home in Wichita and Irwin worked for the City. In 1970, the family moved to Cedar Vale. Irwin worked as a mechanic and was the Fire Chief. In 1986, they moved to Eureka. He worked for FE Bliss, Tireland, Eastside, and Napa, retiring in 2011. He was a member of Fidelity Lodge #106 A.F. & A.M., and Midian Shrine of Wichita. He is survived by his wife, Marlene of the home; five children, Clarence “Leroy” Moreland of Sedan; Robert Eugene Moreland of Limo, Ohio; Mary “Theressa” Tye of Douglass; Pamela Ann Edwards of Wichita; and Eddie Dean Moreland of Wichita; fifteen grandchildren; thirty great-grandchildren; step-sister, Karen Minard of Wichita; and step-brother, Darrell Dreasher. He was preceded in death by his parents, and one daughter, Daphne Lynn Emmert. Memorial services will be held at 1:00 P.M., Tuesday, May 24, 2016 at the First United Methodist Church in Eureka, with Reverend Kenneth Baker officiating. Cremation has been effected. In lieu of flowers, the family has requested that memorials be made to the Midian Shrine Plane of Mercy or to Shriners Hospitals for Children. Contributions may be sent in care of Koup Family Funeral Home, P.O. Box 595, Eureka, KS 67045, which is in charge of service arrangements. Condolences may be left for the family online at koupfunerals.com

The family of Clarence Irwin Moreland, Jr created this Life Tributes page to make it easy to share your memories.

Send flowers to the Moreland family.