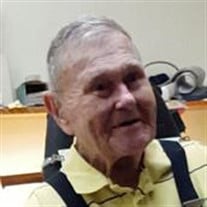 Clarence Isaac “Pete” Groat of Eureka, died Sunday, January 27, 2019, at Vintage Park of Eureka, at the age of 96. Pete was born February 19, 1922, on the Browning Ranch, in rural Madison, Kansas, the son of Clarence Leon and Sarah Alice (Cunningham) Groat. He was raised in the Madison area and attended local schools. Upon completion of his school, Pete went to work with his father on the family farm, until the farm was sold. He then went to work for Greenwood County for a short while before going to work for Wood Oil Company for several years. Pete later returned to work for Greenwood County as a heavy equipment operator where he remained until his retirement in the late 1980’s. He was an avid gardener and fisherman, and also a family caregiver until his health declined. At that time, Pete moved to Magic Circle and later to Vintage Park of Eureka. He was a Mason, and attended the Reece Christian Church. Pete is survived by several nieces and nephews. He was preceded in death by his parents, and sisters: Flora Maxine Mann, Martha Edna Mann, and Inez Ilene Cassin. Graveside services are set for 11:00 A.M., Friday, February 1, 2019 at the Greenwood Cemetery in Eureka, with Pastor Chauncey Biby of the Reece Christian Church officiating. Visitation hours are set from 5:00 P.M. to 7:00 P.M., Thursday at the funeral home. In lieu of flowers the family has requested that memorials be made to Vintage Park of Eureka. Donations may be sent in care of Koup Family Funeral Home, P. O. Box 595, Eureka, KS 67045 which is overseeing arrangements. Online condolences may be left for the family at koupfunerals.com

The family of Clarence Isaac "Pete" Groat created this Life Tributes page to make it easy to share your memories.

Send flowers to the Groat family.