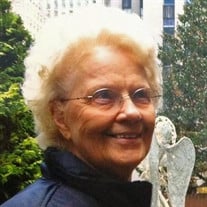 Clara (Swayne) Stone, formerly of Eureka, Kansas, died on Thursday, January 18, 2018, at Wichita Presbyterian Manor in Wichita, at the age of 86. She was born July 20, 1931, near Ruleton, Kansas, the daughter of Henry Franklin and Ethel (Doggett) Swayne. She was raised in Sherman County and attended local schools, graduating from Kanorado High School with the class of 1948. After high school she worked at Duckwall Drug Store in Goodland before moving to Emporia to attended Emporia State Teacher’s College. On May 31, 1958, Clara was united in marriage to Robert Forest Stone in Miami, Oklahoma. They made their home in Eureka and subsequently had two sons. Clara managed the Super D discount store and later the Cablevision office in Eureka. Clara was a member of the First United Methodist Church of Eureka and a 50-year member of Queen Bess Chapter No. 56 Eureka, Order of the Eastern Star, where she held multiple local and statewide offices. She is survived by her sons, Randy Stone of Watertown, Massachusetts; and Rick Stone of Wichita, six grandchildren; three great-grandchildren; and three siblings, Ted Swayne of Kanorado; Doyce Pratt of Phoenix, Arizona; and Dee Swayne of Bogue, Kansas. She was preceded in death by her parents, husband, and three siblings, Henry “JR” Swayne; Jean Fick, and Peggy King. Funeral services will be held at 2:00 P.M., Monday, January 22, 2018, at Koup Family Funeral Home, with Pastor Warren Olson of the Hamilton United Methodist Church officiating. Interment will follow at Greenwood Cemetery. Visitation hours are set from 1:00 P.M. to 3:00 P.M., Sunday, at the funeral home. In lieu of flowers, the family has requested that memorials be made to the Alzheimer’s Association. Contributions may be sent in care of Koup Family Funeral Home, P.O. Box 595, Eureka, KS 67045, which is overseeing arrangements. Condolences may be left for the family online, at koupfunerals.com.

Clara (Swayne) Stone, formerly of Eureka, Kansas, died on Thursday, January 18, 2018, at Wichita Presbyterian Manor in Wichita, at the age of 86. She was born July 20, 1931, near Ruleton, Kansas, the daughter of Henry Franklin and Ethel (Doggett)... View Obituary & Service Information

The family of Clara (Swayne) Stone created this Life Tributes page to make it easy to share your memories.

Send flowers to the Stone family.