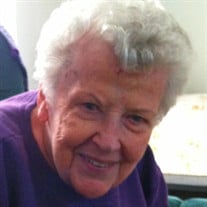 Clara “Jane” Freeman of Wichita, formerly of Eureka, entered eternal rest on Tuesday, December 4, 2018 at Marjorie’s Home in Wichita, with her daughters by her side, at the age of 95. She was born on September 10, 1923 in Fort Scott, Kansas, the daughter of Paul Wendell and Nina Evelyn (Welch) Stiffler. She was raised in Eureka and graduated from local schools. She later attended Fort Scott Community College, graduating in 1944. On January 1, 1945, Jane was united in marriage to Thomas Allen “Tad” Davis, Jr. in Eureka. They made their home in Eureka. To this union, two children were born. They lived in several different places before settling in Wichita in 1958. Jane was a bookkeeper for a doctor in Wichita. In 1976, they returned to Eureka and Jane worked at Sears as a salesperson. She retired in 1982. Tad preceded her in death on January 10, 1991. On June 14, 1992, Jane was united in marriage to Sylvester Thaine “Ted” Freeman in Eureka. Jane was a member of Christ Lutheran Church, very active in WELCA there and in the choir. She was also a member of the Eureka Music Club, the Lioness Club, and Entre Nous. Ted preceded her in death on February 21, 2004. Jane’s many passions include cooking, baking, and sewing. She is best known for her love of music and her talent of playing the piano and organ. Although she was unable to engage in these interests during her final years, she never lost her enthusiasm for music. The family wishes to express their heartfelt gratitude to Marjorie’s Home, where she was lovingly cared for during her last eight months, and to Kindred Hospice, which provided her and the family with many acts of kindness, love, and care. She is survived by her daughters, Nancy Davis of Wichita; Sally Esparza of Santa Barbara, California; step-children, Valerie Carney of Eureka; and Kevin Freeman of Walla Walla, Washington; four grandchildren: Jennifer, Jeremy, Joaquin, and Hannah; four step-grandchildren, Camille, Angela, Darrin, and Alicen; four great-grandchildren: Devan, Dan, Megan, and Thomas; two step-great-grandchildren, Sylvia and Maisie; and two nieces and one nephew: Betty and husband, Bill Campbell; Linda Krause; and Michael Wagner. She was preceded in death by her parents; husbands; and sister, Doris E. Wagner. Funeral services will be held at 2:00 P.M., Tuesday, December 11, 2018 at Koup Family Funeral Home, in Eureka, with Chaplain Tony Armstrong of Kindred Hospice officiating. Interment will follow at Greenwood Cemetery. In lieu of flowers, the family has requested that memorials be made to Christ Lutheran Church or to Kindred Hospice Children’s Bereavement Camp. Contributions may be sent in care of Koup Family Funeral Home, P.O. Box 595, Eureka, KS 67045, which is overseeing arrangements. Condolences may be left for the family online, at koupfunerals.com.

The family of Jane Davis-Freeman created this Life Tributes page to make it easy to share your memories.

Send flowers to the Freeman family.