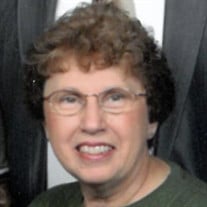 Claire Elaine (Rathke) Kimberlin of Madison, KS, went to meet her Lord and Savior, surrounded by her loving family, on Saturday, April 9, 2022, at her home in Madison, at the age of 77. She was born September 24, 1944, in Emporia, KS, the daughter of William and Alvina (Kuhn) Rathke. She was raised on a farm west of Olpe, KS and attended local schools, graduating from Olpe, High School with the Class of 1962. On January 12, 1963, Claire was united in marriage to Robert Gene Kimberlin, Jr. in Emporia. They began their married life in Fall City, NE, then to Madison, KS. Bob was drafted and sent to Viet Nam. Upon his discharge they moved to Colorado Springs, CO, for a brief period, before returning to Madison. Claire worked several different jobs. She was the Madison City Clerk, worked at Olpe State Bank, Birch Telecom, First Community Bank, Emporia State Bank, was the first Madison Casey’s Manager, and ended her working career at Lyon County State Bank. Claire was everything a mother could be. She loved her flower gardens, cooking, canning, and her grandchildren were her pride and joy. She was a member of the United Methodist Church of Madison. She is survived by her husband Bob, of the home; two daughters: Tanya Elaine and husband John Hudson, of Hamilton; and Nikole Kerwin and Tommy Highsmith of Salina; and four grandchildren: Kimber Lin Hudson, Grace Kerwin, Nik Highsmith, and Cassie Springer; and her beloved puppy, Lady Owen. She was preceded in death by her parents and five siblings: James Rathke, Helen Rathke Mackey, Bob Rathke, Warren Rathke, and Lee Rathke. Memorial services are set for 2:00 P.M., Tuesday, April 19, 2022, at the United Methodist Church in Madison with Pastors John Bright and Bob Robison officiating. Inurnment will follow at Blakely Cemetery immediately following the service. Cremation has been effected. In lieu of flowers the family requests that memorial contributions be made to Main Street Mommas or to American Legion Post #124. Contributions may be sent to Koup Family Funeral Home, P.O. Box 595, Eureka, KS, 67045, which is overseeing arrangements. Condolences may be left for the family online at koupfunerals.com

Claire Elaine (Rathke) Kimberlin of Madison, KS, went to meet her Lord and Savior, surrounded by her loving family, on Saturday, April 9, 2022, at her home in Madison, at the age of 77. She was born September 24, 1944, in Emporia, KS, the daughter... View Obituary & Service Information

The family of Claire Elaine (Rathke) Kimberlin created this Life Tributes page to make it easy to share your memories.

Send flowers to the Kimberlin family.