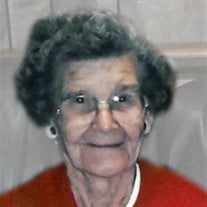 Charlotte Ann Wiggins Charlotte Ann Wiggins of Eureka, passed away on Thursday, September 13, 2018, at Greenwood County Hospital in Eureka at the age of 94. She was born June 22, 1924, in South Salem Township, Greenwood County, Kansas, the daughter of Charles Herbert and Fern Lorene (Hamon) Barker. She attended Ivanpah Grade School and graduated from Eureka High School with the Class of 1942. Charlotte later attended Wesley School of Nursing where she earned her RN degree in 1945. She worked at the El Dorado Hospital. On June 1, 1946, Charlotte was united in marriage to Charles William “Bud” Wiggins, in Eureka. They made their home in the Upper Fall River community and raised three children. He preceded her in death on June 12, 2018. Charlotte, lovingly known as “Granny Bud” to family, was a wife, mother, grandmother, and great-grandmother. She was a seamstress who loved doing handwork and quilting, passing down her talent for four generations. She loved her flowers and working in the garden. She was an exceptional baker, teaching 4-Her’s for many years. Charlotte was always ready with a plate of cookies for anyone who stopped by. She was devoted to the “country” church and treasured the old-time hymns. She is survived by one daughter, Sue and husband, Maurice Erickson of Eureka; one son, Tim and wife, Shelly Wiggins of Admire; four grandchildren: Susan and husband, Morris Johnson of Augusta; Jennifer and husband, Wade Ricker of Collyer; Nancy and husband, Robby Wade of Eureka; and Matt Wiggins and partner, Kate Smith of Hartford; six great-grandchildren; and nine great-great- grandchildren. She was preceded in death by her parents; husband of 72 years, Bud; daughter, Judy Wiggins; infant sister, Dorothy; and twin brother, Charles, killed in action in France, during World War II. Funeral services will be held at 10:00 A.M., Wednesday, September 19, 2018 at Christ Lutheran Church, in Eureka, with Pastor Tim Meyer officiating. Interment will follow at Greenwood Cemetery, in Eureka. Visitation hours are set from 5:00 P.M. to 7:00 P.M., Tuesday, at the funeral home. In lieu of flowers, the family has requested that memorials be made to the Charlotte Wiggins Memorial Fund. Contributions may be sent in care of Koup Family Funeral Home, P.O. Box 595, Eureka, KS 67045, which is overseeing arrangements. Condolences may be left for the family online, at koupfunerals.com.

The family of Charlotte Ann Wiggins created this Life Tributes page to make it easy to share your memories.

Send flowers to the Wiggins family.