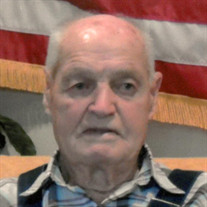 Charles William “Bud” Wiggins of Eureka, died on Tuesday, June 12, 2018, at Vintage Park in Eureka, at the age of 101. He was born October 13, 1916, in South Salem township, Greenwood County, Kansas, the son of George and May (Black) Wiggins. He was raised in the Upper Fall River area, attending grade school at Holverson. He helped with the family farm. Later he went to Colorado and California to work, farming and ranching. He joined the United States Army in 1942 after Pearl Harbor. Bud served in the Pacific Theater; he saw combat in Australia, and the Phillippine Islands, where he earned the Purple Heart. Returning home at the end of the war, Bud married Charlotte Barker on June 1, 1946, in Eureka. They made their home in the Upper Fall River community where they raised three children. Bud worked for the Cities Services Oil Co. for many years, and later for the Greenwood County Watershed District maintaining watershed ponds. He kept himself busy with many hobbies, namely carving name rock from natural limestone, making canes from local saplings, doing wood lathe work, and for the last several years making many, many things on his rug loom. Bud is survived by his wife, Charlotte, of the home; daughter, Sue and husband, Maurice Erickson, of Eureka, Kansas; son, Tim and wife, Shelly Wiggins of Admire, Kansas; four grandchildren: Susan and husband, Morris Johnson; Jennifer and husband, Wade Ricker; Nancy and husband, Robby Wade; and Matt Wiggins and partner, Kate Smith; six great-grandchildren; and nine great-great-grandchildren. He was preceded in death by his parents; daughter, Judy Wiggins on May 15, 1971; his brothers, Dick and John Wiggins; and his sisters, Mary Dunlap, Helen Kiefer, Dorothy Postlewaite, Jessanna “Sis” Whitehead, and Betty Trembly. Funeral services will be held at 10:00 A.M., Saturday, June 16, 2018 at Christ Lutheran Church, in Eureka, with Pastor Tim Meyer officiating. Interment will follow at Greenwood Cemetery. Military honors will be rendered by Veterans of Foreign Wars Post #2712 of Eureka. Visitation hours are set from 5:00 P.M. to 7:00 P.M., Friday, at the funeral home. In lieu of flowers, the family has requested that memorials be made to the Charles W. “Bud” Wiggins Memorial Fund. Contributions may be sent in care of Koup Family Funeral Home, P.O. Box 595, Eureka, KS 67045, which is overseeing arrangements. Condolences may be left for the family online, at koupfunerals.com.

The family of Charles W. "Bud" Wiggins created this Life Tributes page to make it easy to share your memories.

Send flowers to the Wiggins family.