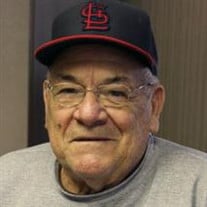 Charles Ernest Dehlinger of Eureka, died on Saturday, February 1, 2020, at Greenwood County Hospital, in Eureka, at the age of 86. He was born on November 24, 1933, in Emporia, the son of Ernest Glen “Dutch” and Bernice Lorena (Smith) Dehlinger. He was raised in Reece and Virgil, graduating from Virgil High School with the Class of 1951. He then attended the College of Emporia. While at Emporia he broke the basketball collegiate scoring record later broken by Wilt Chamberlain. In 1956, he joined the United States Army where he served with honor and dignity. After his discharge, he completed a Bachelor's degree in Business Administration with a minor in Biology. He also played basketball for Vickers in the Industrial League. In 1959, Charlie was united in marriage to Sharon Lynn Prye in Topeka. They made their home in Virgil where Charlie taught school. In 1960, they moved to Eureka and he started teaching and coaching at Eureka High School. He educated students in this position for over thirty years, retiring in the mid 90’s. He was a member of the Virgil United Methodist Church, the Jaycees, and in 2015 was inducted into the National Association of Intercollegiate Athletics Basketball Hall of Fame. He is survived by his wife, Sharon of the home; three children, Greg and wife, Jill Dehlinger of Augusta; Jeff Dehlinger of Eureka; and Kristi and husband, Randy Snider of Altamont; seven grandchildren: Taylor and wife, Madeline Dehlinger; Madison Dehlinger; Clay Snider; Kylie and husband, Tyler Gero; Carly Snider; Tori Dehlinger; and Blayke Dehlinger; and three great-grandchildren: Molly Dehlinger, Hank Dehlinger, and Brylee Gero. He was preceded in death by his parents, and two siblings, Kathryn Swedberg and Ernestine Nibarger. A Celebration of Life will be held at 2:00 P.M., Saturday, February 8, 2020, at the Eureka Country Club in Eureka. Cremation has been effected. Inurnment will take place at a later date at Virgil Cemetery. In lieu of flowers, the family has requested that memorials be made to the Coach Dehlinger Memorial Scholarship. Contributions may be sent in care of Koup Family Funeral Home, P.O. Box 595, Eureka, KS 67045, which is overseeing arrangements. Condolences may be left for the family online, at koupfunerals.com.

The family of Charlie Dehlinger created this Life Tributes page to make it easy to share your memories.

Send flowers to the Dehlinger family.