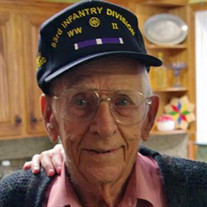 C. “Del” Smith Cecil Delbert Smith (Del Smith) of rural Toronto, Kansas passed away on Sunday, January 22, 2017 at the Kansas Veterans Home in Winfield at the age of 91, surrounded by his family. He was born on May 29, 1925 in Eureka, Kansas, the son of Cecil E. Smith and Ingaber (Aagard) Smith. Del attended several elementary schools in Thrall, Reece, Salyards, near Neal and others in Oklahoma as his father moved with the oil boom in the 30's. He attended High School in Toronto where he graduated in 1943. Following graduation, he volunteered for the United States Army. The day he turned 19 he was shipped to Europe where he went in on Omaha Beach D-Day +11 and joined the 83rd Infantry. He was combat wounded twice and awarded two Purple Hearts along with other commendations. Following his Honorable Discharge from the Army after WWII, in 1947 he married LaVon Harris of Toronto, Kansas. He went to work for the Missouri Pacific Railroad as a Telegraph Operator and Station Agent. Del, known as "Smitty" on the railroad, worked in Toronto, LaHarpe, and Iola and later Wichita to work the downtown and 21st street yard office. In 1963 he transferred to Durand with the Missouri Pacific and moved to rural Toronto to pursue his passion of raising horses and cattle. Del retired from the Missouri Pacific/Union Pacific Rail Road in 1984 after 37 years to continue ranching and raising horses as well as traveling around the US with their camper. He was a member of the Toronto American Legion, American Quarter Horse Association, American Paint Horse Association and attended the Toronto United Methodist Church. He was preceded in death by his wife, LaVon, of 64 years in 2012, and survived by his sons, Thomas J. and wife, Lisa Smith of McKinney, Texas; James M. and wife, Susie Smith of Derby, Kansas, and his five grandchildren: Kelli, Staci, Levi, Thaddeus and Caleb. Funeral services will be held at 2:00 P.M., Friday, January 27, 2017 at Koup Family Funeral Home, in Eureka with Kevin Lawrence of the Toronto United Methodist Church officiating. Interment will follow at Toronto Cemetery. In lieu of flowers, the family has requested memorials be made to the Wounded Warrior Project or to the American Heart Association. Contributions may be sent in care of Koup Family Funeral Home, P.O. Box 595, Eureka, KS 67045, which is overseeing arrangements. Condolences may be left for the family online, at koupfunerals.com

The family of Cecil Delbert "Del" Smith created this Life Tributes page to make it easy to share your memories.