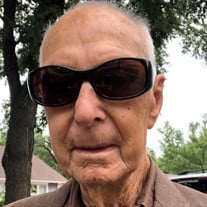 Cecil Lloyd Gilmore of Eureka, died on Friday, April 19, 2019, at the Greenwood County Hospital in Eureka, at the age of 99. He was born on October 9, 1919, in Tyro, Kansas, the son of Lloyd Lincoln and Emma Mae (Wilson) Gilmore. He was raised in Tyro and attended local schools. He worked in various places in the Tyro-Independence area. On July 30, 1938, Cecil was united in marriage to the love of his life, Geraldine E. Keath in Columbus, Kansas. They made their home in Tyro. To this union, three children were born. After World War II he began working for Sinclair Oil as a maintenance pipeline welder. He was later transferred to Indiana, then Illinois where they lived on the farm for thirty-five years. He retired in 1978 and returned to Eureka where he owned and operated a farm. Cecil raised cattle, baled hay, and hauled rocks through 2018, at 98 years of age. Geraldine preceded him in death on August 7, 2014. He is survived by one son, Charles Gilmore of Eureka; ten grandchildren; 31 great-grandchildren; 41 great-great-grandchildren; one great-great-great-grandchild; and one sister, Roberta Jean and husband Jack Davis of Wichita. He was preceded in death by his parents; wife; two children, Karen Stonebraker, and William Ray Gilmore; and three siblings, Betty Lou Gilmore, Bill Monroe Gilmore, and Art Gilmore. Funeral services will be held at 10:00 A.M., Tuesday, April 23, 2019, at Koup Family Funeral Home, in Eureka with Mr. Zach Longest officiating. Cremation will be effected following the service. A private family inurnment will take place at Greenwood Cemetery, at a later date. In lieu of flowers, family has requested that memorials be made to the Greenwood County Hospital. Contributions may be sent in care of Koup Family Funeral Home, P.O. Box 595, Eureka, KS 67045, which is overseeing arrangements. Condolences may be left for the family online, at koupfunerals.com.

Cecil Lloyd Gilmore of Eureka, died on Friday, April 19, 2019, at the Greenwood County Hospital in Eureka, at the age of 99. He was born on October 9, 1919, in Tyro, Kansas, the son of Lloyd Lincoln and Emma Mae (Wilson) Gilmore. He was raised... View Obituary & Service Information

The family of Cecil Lloyd Gilmore created this Life Tributes page to make it easy to share your memories.

Send flowers to the Gilmore family.