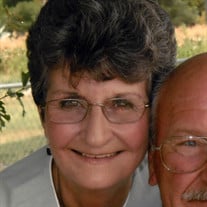 Cathy Umholtz Cathy Lea Umholtz, formerly of Fall River, Kansas, died on Friday, July 26, 2019, at the Eureka Nursing Center, in Eureka, at the age of 77. She was born on December 20, 1941, in Buffalo, Kansas, the daughter of Claude and Dolly (Cook) Burkhart. She was raised in Yates Center and attended local schools. On July 5, 1956, Cathy was united in marriage to Earl Lloyd Umholtz in Newton. They made their home in Hesston. To this union, four children were born. The family lived in Yates Center, Miami, Oklahoma, and Udall, where Earl operated a plumbing business for thirty years. They retired to Fall River in the late 90’s. Cathy was a member of the Severy Baptist Church. She is survived by her husband, Earl of the home; four children: Leanne and husband, Michael Berry of Derby; Bruce and wife, Michelle Umholtz of Udall; Lynn and wife, Brenda Umholtz of Wichita; and Craig and wife, Tina Umholtz of Burden; seven grandchildren: Kimberly Miller, Cy Umholtz, Bradley Berry, Lindsy Umholtz, Kayla Umholtz, Tyler Davis, and Shane Davis; ten great-great-grandchildren: Acen Suffron, Avaree Suffron, Peyton Miller, Cole Miller, Alex Miller, Kyle Miller, Addy Davis, Annisten Davis, Parker Davis, and Tessa Davis; and one sister, Ladonne and husband, Jim Sweeny of Broken Arrow, Oklahoma. She was preceded in death by her parents and brother, Daniel Burkhart. Memorial services will be held at 10:00 A.M., Tuesday, August 13, 2019 at Udall Cemetery, in Udall. In lieu of flowers, the family has requested that memorials be made to the Udall Baptist Church or to the Severy Baptist Church. Contributions may be sent in care of Koup Family Funeral Home, P.O. Box 595, Eureka, KS 67045, which is overseeing arrangements. Condolences may be left for the family online, at koupfunerals.com.

Cathy Umholtz Cathy Lea Umholtz, formerly of Fall River, Kansas, died on Friday, July 26, 2019, at the Eureka Nursing Center, in Eureka, at the age of 77. She was born on December 20, 1941, in Buffalo, Kansas, the daughter of Claude and Dolly... View Obituary & Service Information

The family of Cathy Lea Umholtz created this Life Tributes page to make it easy to share your memories.

Send flowers to the Umholtz family.