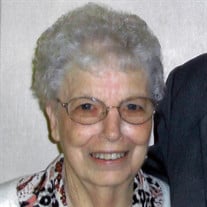 Carroll Imogene “Genie” Stewart of Eureka, Kansas, died on Sunday, August 20, 2017, at Greenwood County Hospital in Eureka, at the age of 82. Genie was born on March 23, 1935, in Clay County, Texas, the daughter of Cecil Riley and Gertrude (Branch) Burch. She was raised in Whitesboro, Texas and graduated from local schools. On June 4, 1954, Genie was united in marriage to Lloyd Thomas Stewart in Sherman, Texas. They made their home in Springfield, Missouri attending the Baptist Bible College. After Lloyd completed his degree the family moved throughout Kansas, Oklahoma, and Texas while Lloyd was Pastoring. In 1978, the family moved to Eureka, Kansas. Genie was a member of the Bible Baptist Church of Eureka, Kansas. She is survived by her husband, Lloyd of the home; one son, Gregory L. and wife, Lois Stewart of Eureka, Kansas; and two grandchildren, Wesley and Justin Stewart. She was preceded in death by her son, Randall Ray Stewart; sister, Doris Hine; and brother, Glenn Burch. Funeral services will be held at 2:00 P.M., Thursday, August 24, 2017 at Koup Family Funeral Home, in Eureka with Pastor Russell Judd of the Bible Baptist Church officiating. Interment will follow at Greenwood Cemetery, in Eureka. Visitation hours are set from 5:00 to 7:00 P.M., Wednesday, at the funeral home. In lieu of flowers, the family has requested that memorials be made to the Bible Baptist Church Building Fund. Contributions may be sent in care of Koup Family Funeral Home, P.O. Box 595, Eureka, KS 67045, which is overseeing arrangements. Condolences may be left for the family online, at koupfunerals.com

The family of Genie Stewart created this Life Tributes page to make it easy to share your memories.

Send flowers to the Stewart family.