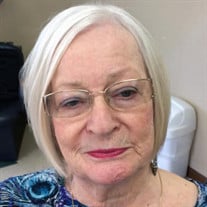 Carolyn “Jayne” Keleher Carolyn Jayne Keleher, formerly of Mountain Home, Texas, died Tuesday, December 15, 2020, at Eureka Nursing Center in Eureka, Kansas, at the age of 87. Jayne was born October 11, 1933, in Iowa City, Iowa, the daughter of Gordon and Margaret (Cochrum) Marsh. She was raised in Iowa City, attending local schools and graduating from Iowa City High School. Following graduation, she attended the University of Iowa. In 1954, Jayne was united in marriage to Daniel Dean Keleher in Iowa City. The family moved to Wichita, Kansas where she was a homemaker, raising five children. During this time, she returned to school at Wichita State University, attaining a Master’s Degree in Education. This marriage ended in divorce. Jayne married Jack Pinhero; he preceded her in death. She worked as a high school English teacher, a career she followed until her retirement in the early 2000’s. After 30 years, Jayne was reunited in marriage to her first love, Daniel Dean Keleher. She then relocated to Mountain Home, Texas. He preceded her in death on November 16, 2005. She was a Lifetime Master in the American Contract Bridge League. She is survived by one daughter, Loree Horton of Eads, Tennessee; 10 grandchildren: Jeremy Sutton, Kristin Sickler, Sean Keleher, Cole Keleher, Rachael Buck, Nick Keleher, Jesse Buck, Rebecca Horton, Clay Horton, and Dillon Buck; 15 great-grandchildren and one on the way; one great-great- grandchild; one sister: Margaret Knowling, of Snohomish, Washington; and two brothers: Phil Marsh of San Diego, California; and Alan Marsh of Kirkland, Washington. She was preceded in death by her husbands, Daniel and Jack; a daughter, Linda Buck; and three sons, Daniel, Kevin, and Denton Keleher. A memorial service will be held at a later date. Cremation has been effected. In lieu of flowers, the family has requested that memorials be made to the American Cancer Society or to the Alzheimer’s Association. Donations may be sent in care of Koup Family Funeral Home, P.O. Box 595, Eureka, Kansas which is overseeing arrangements. Condolences may be left for the family online at koupfunerals.com

The family of Carolyn Jayne Keleher created this Life Tributes page to make it easy to share your memories.

Send flowers to the Keleher family.