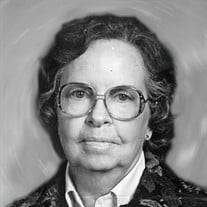 Carole Jean (Gaffney) Shirley of Eureka, died on Thursday, June 3, 2021, at Eureka Nursing Center in Eureka, at the age of 88. She was born on February 24, 1933, in Eureka, the daughter of Burlin Faye and Fern Elizabeth (Scroggins) Gaffney. She was raised in Eureka and attended Eureka High School, graduating with the Class of ’51. Following graduation, Carole went to work at Citizens Bank as a bookkeeper, then to Kansas Power & Light, before starting her career with Southwestern Bell; a position she held for 20 years until she retired. She also did taxes for people and helped at the Eureka Senior Center with their records. On February 22, 1985, Carole was united in marriage to Jack Dean Shirley in Oklahoma. They made their home in Eureka. Jack preceded her in death on May 23, 2006. Carole was a member of the Christian & Congregational Church where she was a youth group leader, sang in the choir, and served on several boards. She was also a member of the Eureka Music Club. She is survived by two nephews: Lloyd Rice, Jr. of Eureka; and Burlin Patterson of California; two nieces: Ann Marshall of Washington, Missouri; and Karen Bentley of Hamilton; and a stepdaughter, Jackie Shirley of Eureka. She was preceded in death by her husband; parents; and two sisters: Doris Fae Patterson, and Virginia Morain Rice-Sowder. Funeral services will be held at 2:00 P.M., Wednesday, June 9, 2021 at Koup Family Funeral Home in Eureka, with Pastor Kevin Lawrence of the Climax United Methodist Church officiating. Interment will follow at Greenwood Cemetery. In lieu of flowers, the family has requested that memorials be made to the Christian & Congregational Church. Contributions may be sent in care of Koup Family Funeral Home, P.O. Box 595, Eureka, Kansas 67045, which is overseeing arrangements. Condolences for the family may be left online at koupfunerals.com.

Carole Jean (Gaffney) Shirley of Eureka, died on Thursday, June 3, 2021, at Eureka Nursing Center in Eureka, at the age of 88. She was born on February 24, 1933, in Eureka, the daughter of Burlin Faye and Fern Elizabeth (Scroggins) Gaffney.... View Obituary & Service Information

The family of Carole (Gaffney) Shirley created this Life Tributes page to make it easy to share your memories.

Send flowers to the Shirley family.