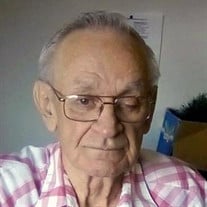 Calvin Lee Bogle of Eureka, died on Monday, January 21, 2019, at Select Specialty Hospital – St. Francis, in Wichita, at the age of 81. He was born on December 24, 1937, in Hamilton, Kansas, the seventh child of Raymond Leslie and Florence Helen (Dewey) Bogle. He attended local schools and graduated from Virgil High School with the class of 1955. He was active in 4-H with showing Hereford cattle and after graduation worked in the oil field. In 1957 he joined the US Navy and was stationed for three years in Argentia, Newfoundland. He was a radar technician for the Naval Air’s early airborne warning squadron, and often flew from Argentia to the Azores. He was honorably discharged for Patuxent River, Maryland in 1961. On December 31, 1957, Calvin was united in marriage to Marilyn Pauline Hale. They made their home in Wichita and later Hutchinson. This marriage later ended in divorce in 1976. They remarried on December 31, 1986. Calvin is survived by his wife, Marilyn of the home; daughter, Dody Burghart of Pittsburg, Kansas; grandson, Karac and wife, Kim Burghart of Mulberry, Kansas; four great-grandchildren: Braxton, Sativa; Aurora, and Journey; sister, Joyce Dillon of Wichita; and numerous nephews and nieces. He was preceded in death by his parents; sons, Randall and Robert Bogle; brothers, Earl, Bill, Jack, and Ernie; and sister, Norma Jean Hartman; several nephews and his beloved Callie cat. Funeral services will be held at 2:00 P.M., Thursday, January 24, 2019 at Koup Family Funeral Home, in Eureka with Pastor Richard Schmidt of New York Valley Church of God, Yates Center officiating. Interment will follow at Greenwood Cemetery, Eureka. Visitation hours are set from 5:00 P.M. to 7:00 P.M., Wednesday, at the funeral home. In lieu of flowers, the family has requested that memorials be made to Friendship Meals or to Veterans of Foreign Wars Post #2712. Contributions may be sent in care of Koup Family Funeral Home, P.O. Box 595, 121 N. Oak St., Eureka, KS 67045, which is overseeing arrangements. Condolences may be left for the family online, at koupfunerals.com.

Calvin Lee Bogle of Eureka, died on Monday, January 21, 2019, at Select Specialty Hospital &#8211; St. Francis, in Wichita, at the age of 81. He was born on December 24, 1937, in Hamilton, Kansas, the seventh child of Raymond Leslie and Florence... View Obituary & Service Information

The family of Calvin Lee Bogle created this Life Tributes page to make it easy to share your memories.

Send flowers to the Bogle family.