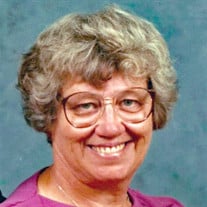 Bonnie Jean Taylor of Eureka, died on Monday, July 25, 2016, at the Eureka Nursing Center, in Eureka, at the age of 87. She was born on May 29, 1929, in Fairview, Oklahoma, the daughter of Cleasey Homer and Winona Lucille (Kahle) Shook. Bonnie was raised on a farm near Longdale, Oklahoma, where she graduated from high school with the Class of 1947. She was united in marriage to Milton “Milt” Taylor, Jr. on May 16, 1947, in Fairview, Oklahoma. In 1948, they welcomed their daughter Veleria “Kathy” (Taylor) Jackson to their small family. They spent their early years of marriage living on a farm in the Fairview area. When Milton answered his calling and became a minister with the Assembly of God Church, they spent many years moving around with his ministry and meeting the spiritual needs of all of the small communities they called home. Bonnie also became a licensed minister with the church and dedicated much of her time to helping and caring for the communities they lived in. When Milton’s voice would no longer hold up to the strenuous needs of a minister, they continued to care for others as house parents to many boys and girls at Methodist Youthville in Dodge City, KS, a boys and girls home in Tulsa, OK, they also helped start a girl’s home in Liberal, KS. They continued to lead and nurture many teenage boys and girls for 15 years. When Milton and Bonnie retired, they moved to Eureka, Kansas to be near their daughter and her family. Bonnie stayed busy with the church she and Milton helped establish, New Life Assembly, in Eureka. She also volunteered at the Eureka Senior Center, where she served on the ESC Nutrition Board, with the Quilting Guild, and with the Hospital Auxiliary of which she was president in 2001-2002. Bonnie loved to be creative and enjoyed sewing, crafting, painting and drawing. Milton preceded her in death on June 4, 2007. She is survived by her daughter, Kathy and husband, Al Jackson of Eureka; two grandchildren: Linda Davis of Wichita, Kansas; and Larry and wife, Gail Jackson of Bella Vista, Arkansas; and four great-grandchildren: Taylor Jackson of Texas, and Britney Purdom, Bryce Davis, and Braden Davis of Wichita, Kansas. She was preceded in death by her parents; husband; and one sister, Iva Lee Gould. A Celebration of Life will be held at 5:00 P.M., Saturday, August 6, 2016, at the Jefferson Street Baptist Church, in Eureka with Pastor John Craighead officiating. Cremation has been effected. Visitation with family will follow the service. Inurnment will take place at Orion Cemetery, Chester, Oklahoma, at a later date. In lieu of flowers, the family has requested that memorials be made to Eureka Nursing Center Activity Fund, as Bonnie loved activities and crafting. Contributions may be sent to Koup Family Funeral Home, P.O. Box 595, Eureka, Kansas 67045, which is in charge of service arrangements. Condolences may be left for the family online at koupfunerals.com.

Bonnie Jean Taylor of Eureka, died on Monday, July 25, 2016, at the Eureka Nursing Center, in Eureka, at the age of 87. She was born on May 29, 1929, in Fairview, Oklahoma, the daughter of Cleasey Homer and Winona Lucille (Kahle) Shook. Bonnie... View Obituary & Service Information

The family of Bonnie Jean Taylor created this Life Tributes page to make it easy to share your memories.

Send flowers to the Taylor family.