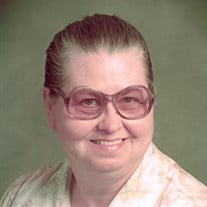 Bonnie Mae Matthews of Eureka, died on Sunday, November 19, 2017 at the Eureka Nursing Center in Eureka, at the age of 92. Bonnie Mae Cochran was born on May 4, 1925, in Benton County, Arkansas, the daughter of Frank and Luella (Coonfield) Cochran. She was raised in Chetopa, Kansas and graduated from local schools. She completed nurses training in Parsons, Kansas with the Nuns. She served in World War II with the Nurse’s Corp at Parsons and worked with a USO Club there. After the war she moved to Eureka, Kansas and met George Knotts. They were united in marriage in the spring of 1948. George preceded her in death in 1967. She later met Palmer Matthews in 1968 and they were united in marriage in the fall of that year. He preceded her in death in 1987. Bonnie worked at the Eureka Hospital and at Medicalodges Nursing Home in Eureka and Yates Center before retirement. She was a giving, caring, and compassionate person. She spent her whole life in service to others. She joined the Seventh Day Adventist Church, lived the Golden Rule, stuck by her faith the rest of her life. She grew in her faith and studied the Bible and prayed every day. She had a green thumb and could grow anything. She is survived by three children, Jerry W. and wife, Charlette Knotts of Augusta, Kansas; David W. Knotts of Eureka; and E. “Leigh” and husband, Nick Cristiano of Houston, Texas; seven grandchildren, Sarah and husband, Dan Perez; Beth and husband, Chris Harrold; Charles Knotts; Lisa Knotts; Walter and wife, Abby Maclaskey; Brett and wife, Aimee Cristiano; and Brianna Cristiano; eleven great-grandchildren, Ebony, Sebastian, Juliana, Isabel, Cameron, Trace, Dakota, Eileen, Vincent, Payton, and Grayson; and three siblings, Irma Stice of Chetopa; Darrell Cochran of Chetopa; and Delores Riddle of Chetopa. She was preceded in death by her husbands; and seven siblings, Cleo Cochran, Bernice Clark, Eunice Ross, J.B. Cochran, Frank “Bud” Cochran, Mary Lou McGill; and Freland Cochran. Funeral services will be held at 1:00 P.M., Monday, November 27, 2017 at the Seventh Day Adventist Church in Eureka with Pastor Francois Erasmus officiating. Interment will follow at Greenwood Cemetery. Visitation hours are set from 1:00 P.M. to 3:00 P.M., Sunday, at the funeral home. In lieu of flowers, the family has requested that memorials be made to the Seventh Day Adventist Church. Contributions may be sent in care of Koup Family Funeral Home, P.O. Box 595, Eureka, KS 67045 which is overseeing arrangements. Condolences may be left for the family online, at koupfunerals.com.

Bonnie Mae Matthews of Eureka, died on Sunday, November 19, 2017 at the Eureka Nursing Center in Eureka, at the age of 92. Bonnie Mae Cochran was born on May 4, 1925, in Benton County, Arkansas, the daughter of Frank and Luella (Coonfield)... View Obituary & Service Information

The family of Bonnie Mae Matthews created this Life Tributes page to make it easy to share your memories.

Send flowers to the Matthews family.