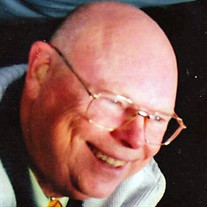 Bobby Joe Dougherty of Longton, died on Wednesday, September 13, 2017, at his home in Longton, at the age of 80. He was born on May 7, 1937, in Eureka, Kansas, the son of Joseph and Lily Leona (Gray) Dougherty. As a child, the family moved around a lot while Bobby’s father worked on the railroad, pipeline work, and mining. In the 1950’s they settled in Wichita. Bobby graduated from Plainview High School, after which he joined the United States Air Force in 1957. In 1956, Bobby was united in marriage to Sandra Rae Arnold. To this union four children were born. Sandra preceded him in death. He was later united in marriage to Charlotte Jane Cullingford. To this union, one child was born. Charlotte preceded him in death. Bobby retired from the Air Force in 1975, at which time he joined the Salvation Army as a Captain, serving in England. In 2003, Bobby was united in marriage to Ann Margaret Jude in Wichita. They returned to the United States in the mid-2000’s, making their home in Longton. He began pastoring at the Piedmont Christian Church and the Beaumont Christian Church. He was a Life Member of VFW Post 1186 in Independence and was active in American Legion Carter-Rader Post #149 of Howard, serving as Vice Commander in 2016. He is survived by his wife, Ann of the home; four children, Lois Marie Adamson of Omaha, Nebraska; Robert Joseph Dougherty of Delaware, Ohio; Margaret Elaine Stokes of Stowmarket, England; and Penelope Jane Williams of Widdrington, England; eight grandchildren; three great-grandchildren; three great-great-grandchildren; and two siblings, Ammie Elaine Rankin of Eureka; Margaret Mae Clare of Tulsa, Oklahoma; and one step-sister, Donna Kay Maddux of Wichita, Kansas. He was preceded in death by his parents; wives, Sandra and Charlotte; daughter, Teresa Rae Dougherty; two grandsons, Tony E. Beal and Timothy N. Beal; brother, Daily Dean Dougherty; and step-siblings, Donnie and Joann. Funeral services will be held at 2:00 P.M., Friday, September 22, 2017 at Koup Family Funeral Home, in Eureka with Rev. Dr. Bill Munson of the Lighthouse Baptist Church officiating. Interment will follow at Greenwood Cemetery, Eureka, Kansas. Visitation hours are set from 5:00 P.M. to 7:00 P.M., Thursday, September 21, 2017 at the funeral home. In lieu of flowers, the family has requested that memorials be made to the Elk County Ministerial Alliance. Contributions may be sent in care of Koup Family Funeral Home, P.O. Box 595, Eureka, KS 67045, which is overseeing arrangements. Condolences may be left for the family online, at koupfunerals.com.

Bobby Joe Dougherty of Longton, died on Wednesday, September 13, 2017, at his home in Longton, at the age of 80. He was born on May 7, 1937, in Eureka, Kansas, the son of Joseph and Lily Leona (Gray) Dougherty. As a child, the family moved... View Obituary & Service Information

The family of Bobby Joe Dougherty created this Life Tributes page to make it easy to share your memories.

Send flowers to the Dougherty family.