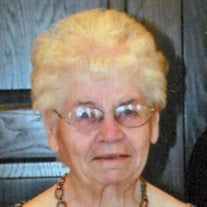 Beverly “Jeanne” Burtin of Eureka, died on March 11, 2021, at the Eureka Nursing Center, in Eureka, at the age of 83. She was born on July 25, 1937, in rural Eureka, the daughter of Virgil Harold and Doris Marguerite (Little) Stever. She was raised in the Hamilton area and attended local schools. On October 10, 1954, Jeanne was united in marriage to Martin Merle Burtin in Eureka. They made their home in Wichita for a year but then returned to the Eureka area. To this union, six children were born. Jeanne was a homemaker and also kept the books for Burtin Auto & Tractor Supply for over 30 years. When the children were gone she would work in many various places in Eureka including the Pioneer Post, Casey’s, the Copper Kettle, Gran Villas, Greenwood County Hospital and finally Eureka Downs. She started at Eureka Downs in the late 80’s, until it closed in 2011. She was a member of the Kansas Quarter Horse Racing Association and was member of the year in 1994. She is survived by her husband, Martin of the home; six children: Mike and wife, Deb Burtin of Eureka; Merle Burtin of Eureka; Marsha and husband, Tim Lilley of Neal; Mark Burtin of Eureka; Monte and wife, Tammi Burtin of Eureka; and Missy Burtin of Eureka; fifteen grandchildren; twenty-two great-grandchildren (with two on the way); and three siblings: Nancy Brecheisen of Hartford; Jim Stever of Emporia; and Rick Stever of Eureka. She was preceded in death by her parents and six siblings: Shirley Ann Nicholson, Connie Sue Hayes, Jerry Dean Stever, Judith Kay Cates, Sally Gulick, and Kathy Irene Higbee. A Celebration of Life will be held at a later date. Cremation has been effected. In lieu of flowers, the family requests that memorials be made to the Greenwood County 4-H Foundation for the new beef barn. Contributions may be sent in care of Koup Family Funeral Home, P.O. Box 595, Eureka, KS 67045, which is overseeing arrangements. Condolences may be left for the family online, at koupfunerals.com.

The family of Jeanne Burtin created this Life Tributes page to make it easy to share your memories.

Send flowers to the Burtin family.