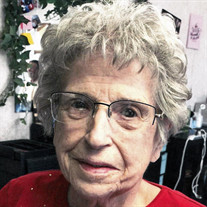 Beulah May Mast, formerly of Severy, died on Sunday, September 9, 2018, in Grove, Oklahoma, at the age of 88. She was born on April 23, 1930, in Piedmont, Kansas, the daughter of Frank “Curly” and Dorothy Miller. She was raised in Piedmont and graduated from Piedmont High School. She later attended Wichita Beauty College. She operated a beauty shop out of her home in Wichita. In the early 60’s she was reacquainted with Dale Mast. On March 31, 1962, Beulah was united in marriage to Dale Eugene Mast in Eureka. They made their home in Severy and Beulah again started a beauty shop in the home which she operated continuously until her retirement in the mid-2000’s. Dale preceded her in death on September 2, 2016. Beulah later moved to Grove when her health became poor. Beulah was a member of the Severy Bridge Club. She is survived by four children, Gary Murray of Springfield, Missouri; Larry Murray of Grove, Oklahoma; Debbie Froman of Billings, Montana; and Ron Mast of Severy; thirteen grandchildren; twenty great-grandchildren; and one great-great-grandchild. She was preceded in death by her parents; husband; and siblings, June Hamilton and Tom Miller. Funeral services will be held at 11:00 A.M., Friday, September 14, 2018 at Koup Family Funeral Home, in Eureka with Pastor Tony Pameticky of the Severy Baptist Church officiating. Interment will follow at Greenwood Cemetery, Eureka. Visitation hours are set from 5:00 P.M. to 7:00 P.M., Thursday, at the funeral home. In lieu of flowers, the family has requested that memorials be made to the West Elk Ag Scholarship Fund. Contributions may be sent in care of Koup Family Funeral Home, P.O. Box 595, Eureka, KS 67045, which is overseeing arrangements. Condolences may be left for the family online, at koupfunerals.com.

The family of Beulah May Mast created this Life Tributes page to make it easy to share your memories.

Beulah May Mast, formerly of Severy, died on Sunday, September...

Send flowers to the Mast family.