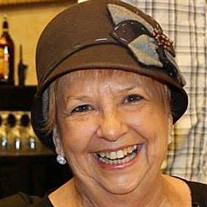 Beulah Rachel Clasen, 70, of Eureka, died Tuesday, June 28, 2016, at Greenwood County Hospital in Eureka. Rachel was born February 5, 1946, the daughter of Marvin William and Mildred Marie (Crews) Smith in Wartrace, Tennessee. She grew up in Assumption, Illinois, graduating from Assumption High School in 1965. She later received her cosmetology license. She owned and operated Rachel’s Beauty Shoppe in Yates Center. On September 14, 1976, Rachel was united in marriage to Richard West “Dick” Clasen at the First Baptist Church in Yates Center, where they made their home. They later relocated to Eureka. Rachel worked as a cosmetologist and opened her own beauty shop, The Design, in 1979. She continued to serve the community of Eureka until she retired in 2009. She and her husband also owned and operated The Eureka Herald. He preceded her in death in 2007. Rachel owned the business until 2015. Rachel was a member of the Eureka Music Club, Christ Lutheran Church of Eureka (where she also served on the Church council), Kansas Hair Fashion Committee, Kansas Press Association, Eureka Country Club Board and the New Beginnings Board. She enjoyed gardening, golfing, playing cards, singing, and was an avid supporter of the Eureka Tornadoes and Kansas Jayhawks, but above all she loved spending time with family. She is survived by one son, Robert Clasen and wife Kelly, of Belton, Missouri; four daughters, Kathy Schwar and husband Bill, of Overland Park; Shari Hendrickson and husband Jim, of Olathe; Rebecca Schultz and husband Tim, of Park City; and Robin Wunderlich and husband Wes, of Eureka; fourteen grandchildren; six great-grandchildren and one on the way; one brother, Dennis Smith and wife Yvonne, of Assumption, Illinois; one sister, Shirley Stelbrink and husband Bob, of Clinton, Illinois; and brother-in-law, David Clasen of Seattle, Washington. She was preceded in death by her parents; her husband; one sister, Bonnie Hardin; and one stillborn daughter, Regina Alyse Clasen. Memorial services will be held at 2:00 P.M., Friday, July 8, at the Christ Lutheran Church in Eureka, with Reverend Tim Meyer officiating. Visitation will be held from 6:00 P.M. to 8:00 P.M., Thursday, July 7, at Koup Family Funeral Home, in Eureka. Inurnment for Richard and Rachel will immediately follow the service at Greenwood Cemetery in Eureka. In lieu of flowers, the family has requested that memorials be made to the Richard and Rachel Clasen Memorial Fund. Contributions may be sent in care of Koup Family Funeral Home, P.O. Box 595, Eureka, KS 67045. Condolences may be left for the family online at koupfunerals.com.

The family of Beulah "Rachel" Clasen created this Life Tributes page to make it easy to share your memories.

Send flowers to the Clasen family.