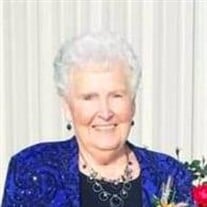 Betty Elmira Titus died on Tuesday, December 7, 2021, at her home in Virgil, KS, at the age of 80. Betty was born August 3, 1941, in Virgil, the daughter of Frank B. and Ella Mae (Smith) Smith. She was raised in Virgil and attended local schools. On December 14, 1957, she was united in marriage to Cecil Owen Titus in Miami, OK. They made their home in Virgil, where she was a stay-at-home mom to their five children, and bookkeeper for Titus Well Service LLC. In the early 1970’s, Betty went to work at the Virgil Post Office as Postmaster Relief. In the early 1980’s she went back to school to earn her GED, an accomplishment she was very proud of. Cecil preceded her in death on August 12, 2005. She was a lifelong resident of Virgil. She was well known as an avid KU Jayhawk fan, and Granny. She was a member of the Virgil United Methodist Church, the Virgil UMW, the Quilting Guild, and Royal Neighbors. She was also Treasurer for the City of Virgil. Betty is survived by her five children: Debora Sue Johnson and husband Virgil of Madison, KS; Steven Lee Titus and wife, Bett of Eureka; Philip O. Titus and wife, Jean of Virgil, KS; Rick Eugene Titus and wife, Terrie of Princeton, KS; and Sandy Kay Ashlock and Fred Burris of Virgil, KS; 12 grandchildren: Lacy Thexton; Scott Johnson; Brandi Cortes; Treva Worrel; Tera Gifford; Laura Haselhorst; Chelsey Masenthin; Shelby Titus; Kimberly Kraft; Karrie Matile; Zevi Ashlock; and Shane Ashlock; 19 great-grandchildren and one on the way; and one sister: Mary Mae Baldomino of Bushong, KS. She was preceded in death by her parents; husband; three brothers: Charles Junior, Carl Edward, and Frankie L.; and two sisters: Dorothy Crooks, and Shirley Jane Fuqua. Funeral services will be held at 10:00 A.M., Saturday, December 11, 2021, at Koup Family Funeral Home in Eureka with Pastor David Siler of the Virgil United Methodist Church officiating. Interment will follow at Virgil Cemetery, Virgil. Visitation hours are set from 5:00 P.M. to 7 P.M., Friday at the funeral home. In lieu of flowers, the family requests that memorials be made to Greenwood County Home Health or to Hand In Hand Hospice. Contributions may be sent in care of Koup Family Funeral Home, P. O. Box 595, Eureka, KS 67045, which is overseeing arrangements. Condolences may be left for the family online at koupfunerals.com.

Betty Elmira Titus died on Tuesday, December 7, 2021, at her home in Virgil, KS, at the age of 80. Betty was born August 3, 1941, in Virgil, the daughter of Frank B. and Ella Mae (Smith) Smith. She was raised in Virgil and attended local schools.... View Obituary & Service Information

The family of Betty Elmira Titus created this Life Tributes page to make it easy to share your memories.

Send flowers to the Titus family.