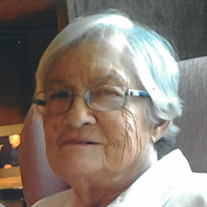 Betty Marie Courter of Eureka, formerly of Severy, died on Wednesday, December 25, 2019 at the Eureka Nursing Center, in Eureka, at the age of 88. She was born on March 22, 1931, in Wichita, the daughter of William Oliver and Edna Gladys (Barg) Henry. She was raised in the Severy area and attended local schools graduating from Severy High School with the Class of 1949. On May 22, 1949, Betty was united in marriage to Charles “Clayton” Courter in Eureka. They made their home in Severy. To this union, five children were born. Betty was a bus driver and custodian at Severy schools. In 1972, the family moved to Goddard and in 1977 to Cimarron where she was a bus driver again. In the mid 90’s, they retired to Severy. Clayton preceded her in death on July 19, 1998. Betty was a member of the Severy United Methodist Church, the United Methodist Women, the Cosmos Club, and the Severy Coffee Club. She is survived by her children, Charles Clayton, Jr., and wife Jeannie Courter of Parker, Colorado; William “Anthony” Courter of Severy; Janet Brown of Emporia; Mark Alan and wife, Teresa Courter of Cocoa, Florida; and Nancy and husband, Charlie Garcia of Emporia; eight grandchildren; five great-grandchildren; and one sister, Harriett Sue Volmer of Independence, Missouri. She was preceded in death by her parents; husband; and brother, William “Bill” Henry. Memorial services will be held at 10:00 A.M., Saturday, January 4, 2020, at the Severy United Methodist Church, in Severy with Pastor Susan Galvan officiating. Cremation has been effected. Inurnment will follow at South Lawn Cemetery, Severy. In lieu of flowers, the family has requested that memorials be made to the Severy United Methodist Women. Contributions may be sent in care of Koup Family Funeral Home, P.O. Box 595, Eureka, KS 67045, which is overseeing arrangements. Condolences may be left for the family online, at koupfunerals.com.

Betty Marie Courter of Eureka, formerly of Severy, died on Wednesday, December 25, 2019 at the Eureka Nursing Center, in Eureka, at the age of 88. She was born on March 22, 1931, in Wichita, the daughter of William Oliver and Edna Gladys (Barg)... View Obituary & Service Information

The family of Betty Marie Courter created this Life Tributes page to make it easy to share your memories.

Send flowers to the Courter family.