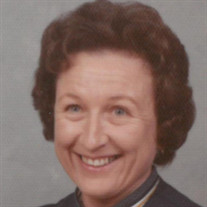 Bettie Joan Scott Bettie Joan Scott of Eureka, died Wednesday, October 13, 2021, at Eureka Nursing Center in Eureka, at the age of 89. She was born November 4, 1931, in Climax, KS, the daughter of Milton J. and Freda May (Bonnette) Lacy. She was raised in Climax, KS, and attended local schools, graduating from Climax High School. On January 22, 1955, she was united in marriage to Wallace Lee, “Wally” Scott. To this union two sons were born. The family made their home in Eureka, where Bettie was a stay-at home wife and mother. When the boys were old enough to go to school, Betty went to work as a bookkeeper for Ranch Aid for twelve years. She loved to go camping, and she and Wally travelled around the country, but her favorite camping trips were around Kansas with family and friends. They also helped with the Upper Fall River Hog Roast every year. Wally preceded her in death on February 3, 2017. Bettie was a member of the United Methodist Church of Climax. She is survived by one son, Jeff and wife, Rhonda Scott of Eureka; three grandchildren: Jeni and husband, Kevin Hooker of Edmond, OK; Tony and wife Christina Scott of Eureka; and Tyler and wife, Emily Scott of Eureka; and 7 great-grandchildren. She was preceded in death by her parents; her husband; her son, Joe; and a brother, Eldon Ray “Sonny” Lacy. Graveside services are set for 10:00 A.M., Monday, October 18, at Greenwood Cemetery in Eureka, with Pastor Stan Seymour of El Dorado officiating. In lieu of flowers, the family has requested that memorials be made to the Alzheimer’s Association. Contributions may be sent in care of Koup Family Funeral Home, P. O. Box 595, Eureka, KS 67045, which is overseeing arrangements. Condolences may be left for the family online at koupfunerals.com.

Bettie Joan Scott Bettie Joan Scott of Eureka, died Wednesday, October 13, 2021, at Eureka Nursing Center in Eureka, at the age of 89. She was born November 4, 1931, in Climax, KS, the daughter of Milton J. and Freda May (Bonnette) Lacy.... View Obituary & Service Information

The family of Bettie Joan Scott created this Life Tributes page to make it easy to share your memories.