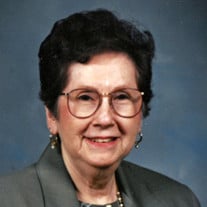 Bettie Lou (Frazier) Brumback Ericson Kersbergen of Eureka, died on Saturday, February 22, 2020 at Vintage Park, in Eureka, at the age of 99. She was born on May 7, 1920, in Eureka, Kansas, to Arthur William and Elizabeth Evadean (Renfroe) Frazier. Bettie Graduated from Eureka High School and Susan B. Allen School of Nursing in El Dorado. She married Charles Edward “Ed” Brumback in El Dorado on May 23, 1942. They had three children: twins Linda and Sandra, and Eddie. Ed was killed in action during WWII. He was a navigator on a B17 that was shot down over Germany. Bettie and children lived in Eureka and El Dorado with her parents and Ed’s parents until she was able to rent an apartment. She worked as a private duty nurse. She married Ted Ericson on May 13, 1950. They lived on Ted’s farm between Quincy and Virgil. Bettie was active in many organizations. Their son, Arthur William “Bill” was born on April 19, 1963. He had Down Syndrome. Ted passed away on November 17, 1963. Bettie and Bill lived in Emporia where she worked as a nurse at Newman Memorial Hospital. Bill moved to Paola to live at Lakemary Center to take advantage of the education he could receive there. Bettie retired in 1986. She moved to Hamilton after being married to Neil Kersbergen in 1987. Bettie and Neil traveled as time and health allowed. Neil passed away on March 6, 2002. Bettie moved to Eureka to live at Vintage Park in 2015. She lived there until her death. She has been a member of Quincy, Emporia, and Hamilton Methodist Churches. She is survived by her daughters: Linda and husband, Gary Burris of Houston, Texas; and Sandra and husband, Forest Smith of Arkansas City, Kansas; six grandchildren: Scott Burris of Houston, TX; Ronnie and wife, Jennifer Brumback of Edwardsville, Illinois; Douglas and wife, Shawna Smith, Arkansas City, Kansas; Stephanie and husband, Todd Durbin of Greenwood, Missouri; Ashley and husband, Steve Cook of Lufkin, Texas; and Kara Smith of Arkansas City, Kansas; and eleven great-grandchildren. She was preceded in death by her parents; sister, Frances Bowling; infant brother, Arthur William, Jr.; husbands: Ed, Ted, and Neil; and by her sons, Ed Brumback and Bill Ericson. Funeral services will be held at 1:00 P.M., Friday, February 28, 2020 at Koup Family Funeral Home, Eureka, with Pastor Warren Olson of the Oatville Community Church officiating. Interment will follow at Greenwood Cemetery, Eureka. In lieu of flowers, the family has requested that memorials be made to Lakemary Center. Contributions may be sent in care of Koup Family Funeral Home, P.O. Box 595, Eureka, KS 67045, which is overseeing arrangements. Condolences may be left for the family online, at koupfunerals.com.

Bettie Lou (Frazier) Brumback Ericson Kersbergen of Eureka, died on Saturday, February 22, 2020 at Vintage Park, in Eureka, at the age of 99. She was born on May 7, 1920, in Eureka, Kansas, to Arthur William and Elizabeth Evadean (Renfroe)... View Obituary & Service Information

The family of Bettie Lou Kersbergen created this Life Tributes page to make it easy to share your memories.

Send flowers to the Kersbergen family.