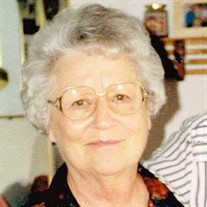 Bessie C. Lewis Bessie C. Lewis of Eureka, died Thursday, February 15, 2018, at the Eureka Nursing Center in Eureka, at the age of 87. She was born July 30, 1930, near Climax, in Greenwood County, Kansas, the daughter of Arnold and Alice Marrieta (Hosler) Smith. She attended rural schools, graduating with the Eureka High School Class of 1949. On January 19, 1949, Bessie was united in marriage to Bobby “Jack” Lewis in Iola. To this marriage, three children were born. The family made their home in the Eureka/Madison area, until the early 1960’s when Jack went to work in El Dorado. While in El Dorado, Bessie did clerical work for the City of El Dorado, retiring in 1980. The family returned to Eureka in 1989. Jack preceded her in death on April 15, 2014. Bessie was a member of the Presbyterian Church of El Dorado, and the Order of the Eastern Star Andrina 93 Chapter of El Dorado. She is survived by one daughter, Jerri Lynn Barton of Tulsa, Oklahoma; one son, James Alan Lewis of Seattle, Washington; four grandchildren; four great-grandchildren; one sister, Aletha Cannon of Ponca City, Oklahoma; and nephew, Terry and wife, Theresa Smith of El Dorado. She was preceded in death by her parents; husband, Jack; one son, Donald E. Lewis; three brothers; and one sister. Funeral services will be held at 1:00 P.M., Friday, February 23, 2018, at Koup Family Funeral Home with Chaplain Gene Sprague of VFW Post #2712 officiating. Interment will follow at Greenwood Cemetery. Visitation hours are set from 11:00 A.M. to 1:00 P.M., Friday, preceding the service. In lieu of flowers, the family has requested memorial contributions be made to VFW Post #2712. Contributions may be sent in care of Koup Family Funeral Home, P.O. Box 595, Eureka, Kansas 67045, which is overseeing arrangements. Condolences may be left for the family online, at koupfunerals.com.

Bessie C. Lewis Bessie C. Lewis of Eureka, died Thursday, February 15, 2018, at the Eureka Nursing Center in Eureka, at the age of 87. She was born July 30, 1930, near Climax, in Greenwood County, Kansas, the daughter of Arnold and Alice Marrieta... View Obituary & Service Information

The family of Bessie C. Lewis created this Life Tributes page to make it easy to share your memories.