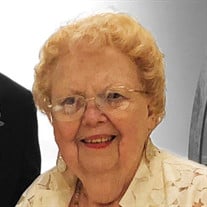 Barbara Carlene Lewis-Long of Eureka, died on Tuesday, September 15, 2020, at the Kansas Medical Center in Andover at the age of 85. Barbara was born March 30, 1935, in Dodge City, Kansas, the first child of Carl Wilford and Evelyn Elizabeth (Thompson) Zink on a wheat farm. She was born two weeks before the worst dust bowl storm to occur in Southwest Kansas. The dust was so thick that her parents placed her crib under the kitchen table and put a wet sheet over the table so that it reached the floor, to keep most of the dust from the baby. She graduated from Dodge City High School in 1953 and worked for Southwestern Bell before marrying Granville Ridge “G. R.” Lewis of Piedmont in 1955. She met him through Lillian Wheatcroft, G. R.’s oldest sister who also worked at Southwestern Bell and was looking for a dancing partner for her brother, who was home visiting from the Navy. The couple moved to a farm near Piedmont when G. R. was discharged from the U.S. Navy that December. While in the Navy, they lived in Vallejo, CA where they shared an apartment with another Navy couple from south Texas. They had a Murphy bed that they were always afraid would fold up on them in the middle of the night. The Lewis’s lived on the farm until moving to Eureka in January of 1976. They operated Lewis TV Service, a family business until 1987. G.R. preceded her in death on November 10, 1993. On May 31, 1997, Barbara married Carl “C.A.” Long in Eureka, where they made their home and began the second phase of their lives, with a combined family full of kids and grandkids. Barbara was an active and involved member of the community, serving as past president as well as holding office in several Eureka organizations involved in community service. She was an active participant of the First United Methodist Church, serving on several committees, including United Methodist women, Fund-Raising, Memorial Services, Membership, Worship and others. She was a member of the Community Benefit Women’s Education Club (WEC) for over 60 years, a charter member of the Eureka Lioness Club, an active member of PEO of Eureka, and a Board member of the Eureka Public Library. She also served as President of Friends of the Library and was a member of the Greenwood County Hospital Auxiliary, where she was a familiar face in the hospital gift shop. Barbara held multiple offices in Entre Nous Study Club and served several years as a sewing leader for the Harmony Sunflowers 4-H Club, and was a ribbon winning participant in Open Class. She was a proud member of the DAR (Daughters of the American Revolution). In her leisure hours, Barbara was an avid reader, gardener and cook. As a young woman, she sewed clothing for herself and her daughter. She played bridge every week with Bridge Club friends, sang with Sweet Adelines and was the State of Kansas Cherry Pie Baking champ two years in a row. She is survived by two children: Shannon (Lewis) Buck of Stockton, California; Shane and wife, Imogene Lewis of Los Angeles, California; and one grandson, Brett and wife, Alison Buck of Las Vegas, Nevada; a sister, Sandra Zink of Loveland, Colorado; and a brother, Kenneth and wife, Ida Zink of Austin, Texas; plus the children she shared with C.A.,: LouAnn and husband, Mike Law of Lancaster, Massachusetts; Amy Hall of Lawrence, Kansas; Audrey (Long) Lewis of Denver, Colorado; Julie and husband, Mike Bowline of Denver, Colorado; and Sybil and husband, Bryan Benson of Libertyville, Illinois; 14 grandchildren: Scott, Steven and Brian Law; Nathan, Heather and Matthew Hall; Alex, Lauren and Becky Lewis; Rachel Deon and Cory Bowline; and Ty and Anna Benson. She was also thrilled to have 18 great-grandchildren. She was preceded in death by her parents; her husbands, G.R., and C.A.; and son-in-law, Charles Hall. Graveside services will be held at 2:00 P.M., Saturday, September 19, 2020 at Greenwood Cemetery in Eureka with Pastor Hyun Jung Choi of the First United Methodist Church officiating. In lieu of flowers, the family requests that memorials be made to the Eureka Public Library or to the First United Methodist Church. Contributions may be sent in care of Koup Family Funeral Home, P.O. Box 595, Eureka, KS 67045, which is overseeing arrangements. Condolences may be left for the family online, at koupfunerals.com.

Barbara Carlene Lewis-Long of Eureka, died on Tuesday, September 15, 2020, at the Kansas Medical Center in Andover at the age of 85. Barbara was born March 30, 1935, in Dodge City, Kansas, the first child of Carl Wilford and Evelyn Elizabeth... View Obituary & Service Information

The family of Barbara Carlene Lewis-Long created this Life Tributes page to make it easy to share your memories.

Send flowers to the Lewis-Long family.