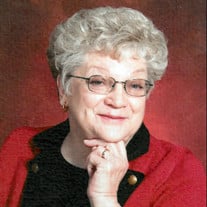 Barbara M. Beitz of Eureka, died on Sunday, February 20, 2022, at Susan B. Allen Memorial Hospital, in El Dorado, at the age of 80. She was born on June 17, 1941, in Eureka, the daughter of Charles Lester and Lois Marie (Teter) Bitler. She was raised in Greenwood County, living in various places while her parents traveled for work. She graduated from Eureka High School with the Class of 1959. She later attended Marymount College in Salina. On November 14, 1961, Barbara was united in marriage to James Sven Beitz in Eureka. They made their home in Eureka. To this union, three children were born. Barbara was the treasurer for Midwest Mill for over forty years, starting in the mid-70’s. She retired in 2015. She was a member of Sacred Heart Catholic Church and taught religious education classes for several years. She was also a member of the Sacred Heart Altar Society and the Fall River Township Board. She gave her time to raise money for the Greenwood County Cancer Society, Christmas Wellspring, and helping with Meals on Wheels. She also volunteered for the Greenwood County election board. She is survived by her husband, Jim of the home; three children: Inga Klahr of Wetmore, Kansas; Tracy Beitz and partner, Melissa of Eureka; and Jason and wife, Tara Beitz of Eureka; three grandchildren: Trevor Klahr, Kendall Beitz, and Kolby Beitz; and three siblings: Dorothy and husband, Richard Hayes of Congress, Arizona; Lew and wife, Sue Bitler of Eureka; and Dan and wife, Carol Bitler of Eureka. She was preceded in death by her parents; son-in-law, Darrek Klahr; and one grandson, Garrett Klahr. Memorial Mass will be held at 10:30 A.M., Friday, March 4, 2022, at Sacred Heart Catholic Church, in Eureka, with Father Nicholaus Jurgensmeyer officiating. Rosary recitation will begin at 10:00 A.M., at the church. Cremation has been effected. Inurnment will follow at Pleasant View Cemetery, Eureka. In lieu of flowers, the family requests that memorials be made to the Sacred Heart Altar Society or to Sacred Heart Catholic Church. Contributions may be sent in care of Koup Family Funeral Home, PO Box 595, Eureka KS 67045, which is overseeing arrangements. Condolences may be left for the family online, at koupfunerals.com.

Barbara M. Beitz of Eureka, died on Sunday, February 20, 2022, at Susan B. Allen Memorial Hospital, in El Dorado, at the age of 80. She was born on June 17, 1941, in Eureka, the daughter of Charles Lester and Lois Marie (Teter) Bitler. She... View Obituary & Service Information

The family of Barbara M. Beitz created this Life Tributes page to make it easy to share your memories.

Send flowers to the Beitz family.