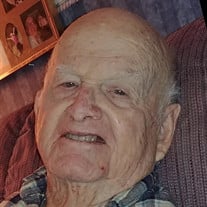 Austin Harry Powell, Jr. of Nowata, Oklahoma, formerly of Eureka, died on Thursday, June 10, 2021, at the home of his son, in Nowata, at the age of 94. He was born on June 9, 1927, in Osage, Oklahoma, the son of Austin Harry, Sr., and Violet Ruth (Donohue) Powell. He was raised in the Osage and Cleveland area, attending Cleveland Elementary and Osage High School, graduating with the Class of 1946. After his schooling, he moved to Coffeyville, Kansas working for the Kansas Department of Transportation. He transferred to the Eureka office in 1949. On April 2, 1950, Austin was united in marriage to Letha Marjorie Starkey in Eureka. They made their home in Eureka. To this union, three children were born. This marriage later ended in divorce. On June 27, 1976, Austin was united in marriage to Erma Lea (Frazier) Ingram in Eureka, where they made their home. She preceded him in death on January 25, 2007. He is survived by his children: Sherrill A. (Powell) Urban and husband, Joe of Eureka; Samuel D. and wife, Donna Powell of Kansas City, Kansas; Michael A. and wife, Judy Powell of Nowata, Oklahoma; eight grandchildren; eight great-grandchildren; two great-great-grandchildren; and one sister, Ruth Gilleland of Mathis, Texas. He was preceded in death by his parents; wife; and six siblings: Fred Powell, Elouise Faye “Lou” Johnson, Shirley Ann Allembaum, Patty Rae Smith, Betty Lou Moore, and Bill Powell. Funeral services will be held at 1:00 P.M., Monday, June 14, 2021 at Jefferson Street Baptist Church in Eureka with Pastor John Craighead officiating. Cremation will be effected following the service and inurnment will take place at a later date at Greenwood Cemetery, Eureka. Visitation hours are set from 1:00 P.M. to 3:00 P.M., Sunday, at the funeral home. In lieu of flowers, the family requests that memorials be made to the JSBC Youth. Contributions may be sent in care of Koup Family Funeral Home, PO Box 595, Eureka KS 67045, which is overseeing arrangements. Condolences may be left for the family online, at koupfunerals.com.

The family of Austin Harry Powell, Jr. created this Life Tributes page to make it easy to share your memories.

Send flowers to the Powell family.