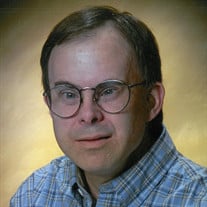 Arthur William “Bill” Ericson of Paola, died Sunday, October 14, 2018, at Louisburg Healthcare and Rehab Center in Louisburg, Kansas, at the age of 55. He was born April 19, 1963, in Eureka, Kansas, the son of Ted and Bettie Ericson. Bill was born with Down Syndrome. He has always been known as Bill. He first lived on the farm between Quincy and Virgil. Ted passed away on November 17, 1963, when Bill was seven months old. Bettie and Bill moved to Emporia where Bettie worked as a nurse at Newman Hospital, and Bill attended school in Emporia. He then moved to Paola when he was seven to attend school at Lakemary Center. He moved to a group home as an adult and spent his time in Adult Services at Lakemary. He is survived by his mother, Bettie Kersbergen of Eureka; sisters, Linda and husband, Gary Burris of Houston, Texas; and Sandra and husband, Forest Smith of Arkansas City; and nieces and nephews. He was preceded in death by his father, Ted Ericson; brother, Ed Brumback; and other relatives. Graveside services will be held at 1:00 P.M., Wednesday, October 17, 2018, at Greenwood Cemetery, in Eureka, with Pastor Kevin Lawrence of the Climax United Methodist Church officiating. In lieu of flowers, the family has requested that memorials be made to Lakemary Center. Contributions may be sent in care of Koup Family Funeral Home, P.O. Box 595, Eureka, KS 67045, which is overseeing arrangements. Condolences may be left for the family online, at koupfunerals.com.

The family of Bill Ericson created this Life Tributes page to make it easy to share your memories.

Send flowers to the Ericson family.