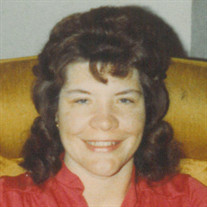 Arlene Gant of Eureka, died on Monday, June 6, 2016, at her home in Eureka, at the age of 75. She was born on July 15, 1940, in Emporia, Kansas, the daughter of Frank and Marguerite (Vohs) Burenheide. She was raised in Emporia, and graduated from Emporia High School with the class of 1960. After her schooling she worked for Woolworth’s Department Store in Emporia. On February 23, 1960, Arlene was united in marriage to Ronald Gant in Miami, Oklahoma. They made their home in Emporia until 1963, when they moved to El Dorado. In 1964, they moved to Shawnee Mission, Kansas. In 1969 the family moved to Council Grove, then in 1980, they moved to Eureka. Arlene worked with her husband as a bookkeeper until 1977, when she started her career as a paraprofessional with the Council Grove School system. She continued as a paraprofessional with U.S.D. 389 when the family moved to Eureka. In 1994, she went to work for Alco, and retired in 2005, as an assistant manager. She is survived by her husband, Ron of the home; sons, Kelly Gant of Council Grove, and Michael Gant of Wichita; daughters, Sherry Hewitt and Shannon Gant, both of Eureka; eight grandchildren; three great-grandchildren; three brothers, Don, Roy, and Gary Burenheide, all of Emporia; and one sister, Joyce Hooper of Edna. She was preceded in death by her parents and twin sister. Funeral services will be held at 10:00 A.M., Friday, June 10, 2016, at Koup Family Funeral Home, with Mr. Joe Kormanik of Alta Vista officiating. Interment will follow in Greenwood Cemetery. Visitation hours are set from 5:00 P.M. to 7:00 P.M., Thursday, at the funeral home. In lieu of flowers, the family has requested that memorials be made to Rivercross Hospice. Contributions may be sent in care of Koup Family Funeral Home, P.O. Box 595, Eureka, KS 67045. Condolences may be left for the family online at koupfunerals.com.

Arlene Gant of Eureka, died on Monday, June 6, 2016, at her home in Eureka, at the age of 75. She was born on July 15, 1940, in Emporia, Kansas, the daughter of Frank and Marguerite (Vohs) Burenheide. She was raised in Emporia, and graduated... View Obituary & Service Information

The family of Arlene Wilhelmina Gant created this Life Tributes page to make it easy to share your memories.

Send flowers to the Gant family.