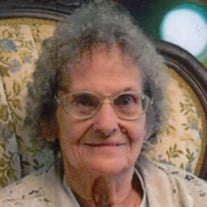 Anna Lee Scott of Eureka, died on Tuesday, March 29, 2016, at Eureka Nursing Center, in Eureka, at the age of 88. Anna was born December 12, 1927 in Florence, the daughter of Azle Greene “AG” and Ida Maude (Vanbiber) Frye. She was raised in Lamar, Missouri, and graduated from Halfway, Missouri High School with the class of 1946, after which she moved to Kansas. On February 20, 1947, she was united in marriage to Ralph Irvin Scott in Emporia. They made their home in Eureka. To this union, three children were born. The family moved frequently during the sixties as Ralph worked in the oil fields. He preceded her in death on December 13, 1972. She was a member of the Greenwood County Hospital Auxiliary. She is survived by three children, Donald Scott of Eureka; Judith Rivers of Burkburnett, Texas; and Richard Scott of Newton; six grandchildren; eleven great-grandchildren; and one brother, Billy Frye of Olympia, Washington. She was preceded in death by her parents, husband, four brothers and one sister. Memorial services will be 11:00 A.M., Monday, April 11, 2016, at Greenwood Cemetery with Pastor Stan Seymour of the First Christian Church of El Dorado officiating. Cremation has been effected. In lieu of flowers, the family has requested memorials be made to the Greenwood County Hospital Auxiliary. Contributions may be sent in care of Koup Family Funeral Home, P.O. Box 595, Eureka, Kansas 67045, which is in charge of arrangements.

The family of Anna Lee Scott created this Life Tributes page to make it easy to share your memories.