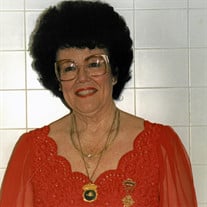 Anne Lee Lockhart of Eureka, Kansas, died on Saturday, February 11, 2017, at Greenwood County Hospital in Eureka, at the age of 98. Lee was born December 02, 1918, in Trenton, Texas, the daughter of Henry Paine and Hattie (Slaydon) Marshall. She was raised in Texas and attended local schools. The family later moved to Ardmore, Oklahoma where she graduated from high school. Lee was united in marriage on October 13, 1948 with Robert William Lockhart in Flora, Illinois. Robert worked for Phillips Petroleum which took the family across the entire United States. In 1952, they settled in Eureka, Kansas where they remained the rest of their lives. Robert preceded her in death on August 15, 1984. Lee was a member of the Eureka Christian Church and was very active in Eastern Star, Rainbows, Eureka Rebekah Lodge, Rebekah Assembly of Kansas, and the International Association of Rebekah Assemblies. Lee was initiated into the Rebekah Degree, Independent Order of Odd Fellows, February 26, 1952 at Eastwood Rebekah Lodge #557 in Eureka. She served as Noble Grand of the local lodge in 1956 and 1974. She held the office of Lodge Secretary for many years. In 1959, Lee received the Rebekah Assembly of Kansas Degree and that same year served as chairperson of the Special Ceremony Committee for the Eastern Kansas section. It was the beginning of a commitment that she took very seriously. Lee was elected President of the Rebekah Assembly of Kansas in 1964 and 1979. She was a representative to the International Association of Rebekah Assemblies (I.A.R.A.) in 1967 and 1981. In 1987, Lee was elected President of the International Association of Rebekah Assemblies (I.A.R.A.). Other offices held in the Rebekah organization include Past President and Past District Deputy President of Kansas District #22, Past Lodge Deputy, Director of Degree work, Past Theta Rho Advisor, Chairman of the Joint Committee, Past Board of Directors for the Kansas Rebekah Odd Fellow Home and Past Representative to the I.A.R.A. Lee also became a member of various units of Odd Fellowship. Being active in Mary Rose Theta Rho Girls Club #66 as Advisor and Senior Sister, an Odd Fellow at Bonner IOOF #357, New Hope IOOF #693, Western Star IOOF #81 and Colby LEA. Lee joined Justice LAPM (Ladies Auxiliary Patriarchs Militant) #32 in 1959 and served as President of the Department Association, LAPM in 2004-05. Her Rebekah Membership included Eastwood Rebekah Lodge #557 in Eureka, associate member of Naomi Rebekah Lodge #566 in Leon, and Augusta Rebekah Lodge #350 in Augusta. She is survived by one son, one daughter, four grandchildren and five great-grandchildren. She was preceded in death by her parents, husband and several brothers and sisters. Private family services will be held at a later date. Inurnment will be held at the Greenwood Cemetery. In lieu of any flowers, the family requests that memorial contributions be made to the Naomi Rebekah Lodge #566. Contributions may be left in care of the Koup Family Funeral Home, P.O. Box 595, Eureka, KS 67045, which is overseeing arrangements. Condolences may be left for the family online, at koupfunerals.com

Anne Lee Lockhart of Eureka, Kansas, died on Saturday, February 11, 2017, at Greenwood County Hospital in Eureka, at the age of 98. Lee was born December 02, 1918, in Trenton, Texas, the daughter of Henry Paine and Hattie (Slaydon) Marshall.... View Obituary & Service Information

The family of Anna Lee Lockhart created this Life Tributes page to make it easy to share your memories.

Send flowers to the Lockhart family.