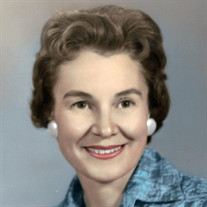 Anita Jane Pitko, age 99 of Eureka, Kansas, passed away on May 2, 2021. She was born on January 2, 1922, in Wellington, Kansas. Her parents, Ned and Peggy Graves, her sister Judy R. Murphy, and husband of 68 years, Alexander Pitko all preceded her. She is survived by two sons, Michael L. (Phyllis) Pitko of Eureka, Kansas and Jon G. Pitko of Haleiwa, Hawaii and grandchildren, William (Pam) Pitko of Eureka, Kansas, Shari (Michael) Berry of Peoria Heights, Illinois; and Michelle Dawn (Rick) Dawson of Pensacola, Florida. She had six great-grandchildren, Haley and Colton Pitko, Erin and Andrew Berry and Sean and Alexandria Dawson. Anita J. Graves was married to Alexander Pitko on October 2, 1943 in Emporia, Kansas. Anita graduated from Emporia High School and Emporia State University, where she received a Bachelors and Masters of Science Degree in Business. She worked in an accounting firm and public education as a business teacher before going to Emporia State, where she was a professor of business for 18 years. She received a doctoral degree from the University of North Texas, Denton, Texas while employed at Emporia State. While at the university, Anita wrote numerous articles which were published in business journals and her dissertation was selected to be reviewed in a juried business journal. She received several grants for research study while teaching at Emporia state. She and her husband retired to Mesa, Arizona in 1983 and lived in a retirement community. She served on a HOA board there and also served as treasurer on the Country Club board. In the summer they would move to Show Low, Arizona where the temperatures were cooler. In 2013, Anita moved from Arizona to Eureka and was a resident of Vintage Park at the time of the death. Private services will be held for family at a later date. Inurnment will be in the Greenwood Cemetery, Eureka, Kansas. As a former past president of a PEO Chapter the family requests that memorials be made to PEO Chapter FR. Contributions may be sent in care of Koup Family Funeral Home, P.O. Box 595, Eureka, KS 67045.

Anita Jane Pitko, age 99 of Eureka, Kansas, passed away on May 2, 2021. She was born on January 2, 1922, in Wellington, Kansas. Her parents, Ned and Peggy Graves, her sister Judy R. Murphy, and husband of 68 years, Alexander Pitko all preceded... View Obituary & Service Information

The family of Anita Jane Pitko created this Life Tributes page to make it easy to share your memories.

Anita Jane Pitko, age 99 of Eureka, Kansas, passed away on May...

Send flowers to the Pitko family.