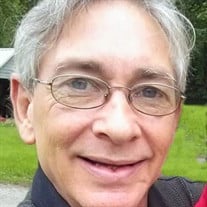 Andrew Loren Bratton of Eureka, died on Friday, October 22, 2021, at his home in Eureka, at the age of 65. He was born October 19, 1956, in Eureka, the son of Donald James “Junior” and Carol LaVonne (Brown) Bratton. He was raised in Eureka and attended local schools. He was a huge music fan and musician. “Android” was united in his first marriage to Karla Sandy and to this union two daughters were born: Kamea and Krecenta. He worked in the oilfields as a roughneck and driller. He also worked as a welder and truck driver for a time. He was instrumental in the start-up of KOTE Radio and had his own on-air show. Andy was united in his second marriage to Kim Blevins and together they had two daughters: Kelsey and Allison. He later worked for Invena for several years as a Master Mechanic. On May 12, 2012, Andrew was united in his third marriage to Lisa Cheryl Hand in Eureka. They made their home in Eureka and owned and operated Stanley Hardware until his health failed and they retired. He will be remembered as an amazing sound tech and for his passionate and precise nature regarding whatever he was doing. He had a drive to figure out how things worked and was like a mad scientist at times, repairing whatever needed repairing, however he could. He enjoyed astronomy and geology, and all of the natural world. Andrew was a member of the Christ Lutheran Church and was a past member of the Church Council. He is survived by his wife, Lisa, of the home; his mother, Carol (Brown) Spear; four daughters: Kamea Bratton of Eureka; Krecenta Clark of Eureka; Kelsey Bratton of Kansas City, Kansas; and Allison Derryberry of Hamilton; ten grandchildren; one great-grandchild; his sister, Lisa Middleton of Emporia, Kansas; and a half-brother, Thomas Worth of Burbank, California. He was preceded in death by his father. Funeral services will be held at 2:00 P.M., Tuesday, October 26, 2021, at Christ Lutheran Church in Eureka, with Pastor Tim Meyer officiating. Interment will follow at Greenwood Cemetery. Visitation hours are set from 5:00 P.M. to 7:00 P.M., Monday, at the funeral home. In lieu of flowers, the family has requested that memorials be made to Christ Lutheran Church. Contributions may be sent in care of Koup Family Funeral Home, P. O. Box 595, Eureka, KS 67045, which is overseeing arrangements. Condolences may be left for the family online at koupfunerals.com.

The family of Andrew Loren Bratton created this Life Tributes page to make it easy to share your memories.

Send flowers to the Bratton family.