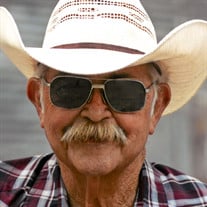 Those who knew him, would not forget him. Eldon Teter of Teterville, Kansas, went to heaven to feed Jesus’ cows on Wednesday, January 8, 2020, around 5:00 P.M., at the Greenwood County Hospital, in Eureka surrounded by his family. He was 77 years old. Eldon was born on August 2, 1942, in El Dorado, Kansas, the eldest son of Albert Ewing and Rachel Patsy (Adams) Teter. He was raised in the Burns area and graduated from El Dorado High School with the class of 1960. In August 1960, while at the carnival at the Butler County Fair in El Dorado, Kansas, he met the love of his life, Merideth Lyn (Lynnie) Burnham, even though she was strictly told not to go to the carnival as there was nothing but trouble to be found there. They were married in El Dorado on November 15, 1963 and made their home in the Burns area. To this union, one daughter was born. Eldon attended Butler County Community College and later Emporia State University for a short time after high school but came home to chase his dream of being a farmer and rancher. He worked for El Dorado schools as a bus driver before going to work for Jack Stanhope, managing the Hulland Ranch southeast of Cassoday, Kansas. In 1978, the family moved to Teterville, Kansas to live on the family ranch. Eldon also started work for the Kansas Turnpike Authority as an Equipment Operator in Cassoday. He retired in 2003 and went back to chasing his dream job of ranching, working for Hendrickson Cattle Company until his health forced him to step back in August 2019. He was your stereotypical rancher and working cattle with him used to mean sorting a pen full of black cows and him yelling to sort off “that one” and once one of the black cows was sorted and headed his way, he would yell, “NO! Not that one! The black one!” At the end of the days work he would pat us on the back and thank us for our help like he had never yelled at us. He was active in many organizations and was always willing to help anyone in need. He was involved in the Kansas Livestock Association, Greenwood County Cattlemen’s Association, Salem Township Board, the Fidelity Masonic Lodge #106 (Lifetime Member), the Midian Shrine, the Greenwood County Shrine Club, Greenwood County 3-Wheelers, Butler County Watershed Board, the Eureka Lions Club and was a member of the Christ Lutheran Church. His greatest loves were his family and his cows but 2 years ago, the best medicine for anything that ailed him was the birth of his great-granddaughter, Kamryn Lyn “Sugar Bear” Bohl. His best days were spent when she would go with him to feed his cows and her pony, Fancy. He would always ask her if she was his “Pardner” with her reply being, “I’m Bapa’s Pardner.” He is survived by his one and only love, Lynnie of the home; daughter and son-in-law, Melissa and husband, Steve Richard of Towanda; four grandchildren: Taci and husband, Ryan Wilson of Abilene, Kansas; Emily Valentine (Thane Bruce) of Eureka, Kansas; Paul Richard of Augusta, Kansas; and Shelby Valentine (Logan Bohl) of Eureka, Kansas; and two great-grandchildren, Kamryn Lyn Bohl of Eureka, Kansas and Thatcher Warren Wilson of Abilene, Kansas; three siblings, Mary Margaret “Maggie” and husband, Ronnie Young of Cassoday, Kansas; Patsy and husband, Bob Watkins of Burns, Kansas; Judy Langhofer of Cassoday, Kansas; sister-in-law, Deb Teter of Burns, Kansas; brother-in-law, Don and wife, Linda Burnham of Tucson, Arizona; and mother-in-law, Pauline Burnham of El Dorado, Kansas. He also leaves many nieces and nephews and their families who mean the world to him: Vince & Rebecca Travnichek of Camdenton, Missouri; Randy & Juli Young of Bixby, Kansas; Laurie Young of Towanda, Kansas; Brad & Annissa Boulanger of Eureka, Kansas; Jim Bob & Jodi Watkins of Burns, Kansas; Jessica Cabrales of El Dorado, Kansas; Jon & Karen Watkins of Wellsville, Kansas; Brice & Hattie Denton of Towanda, Kansas; Robert & Andrea Weber of Parker, Colorado; Nathan & Sherry Teter of Burns, Kansas and Greg & Jamie Shinert of Augusta, Kansas. He was preceded in death by his parents; one brother, Jim Teter; nephew, Matt Young; and father-in-law, Mac Burnham. Memorial services will be held at 10:30 A.M., Saturday, January 18, 2020, at Koup Family Funeral Home, in Eureka with Pastor John Martyn of the Towanda United Methodist Church officiating. Cremation has been effected. A family inurnment will be held at a later date at the Upper Fall River Cemetery. Visitation hours are set from 5:00 P.M. to 7:00 P.M., Friday, at the funeral home. In lieu of flowers, the family has requested that memorials be made to the Greenwood County 4-H Foundation or to the Greenwood County Rodeo Association. Contributions may be sent in care of Koup Family Funeral Home, P.O. Box 595, Eureka, KS 67045, which is overseeing arrangements. Condolences may be left for the family online, at www.koupfunerals.com.

Those who knew him, would not forget him. Eldon Teter of Teterville, Kansas, went to heaven to feed Jesus&#8217; cows on Wednesday, January 8, 2020, around 5:00 P.M., at the Greenwood County Hospital, in Eureka surrounded by his family.... View Obituary & Service Information

The family of Eldon Teter created this Life Tributes page to make it easy to share your memories.

Those who knew him, would not forget him.

Send flowers to the Teter family.